This is small and can be used as a standard PC or with the supplied remote control as a Media Centre PC. If space is at a premium then this offering from Evesham could be the answer. 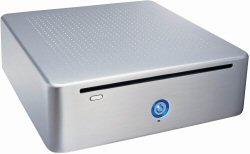 It is 16x16x5cm but once normal leads such as for a monitor and USB are added the depth increases by around another 5cm. It can be used in Media Centre mode but then I found that the back of the unit needs to face you as the remote control sensor is on the rear of the unit. If used in PC mode moving the mouse brings up the ability to get to the standard XP desktop.

In the box you get just the mini PC so you will need a monitor - this is setup for digital but a twin headed cable gives the ability to drive it by analogue - a keyboard and a mouse.

Looking at the Mini PC you have on the front the CD/DVD slot, the eject button for same as well as a large on/off button that glows blue when on. Both the sides and the top have nothing and that leaves the back. There is the input for the power brick, DVI monitor connection (remember a double headed lead is provided) what initially looks like a PS/2 connector but is for another purpose. Ethernet and coaxial connectors as well as three audio connections. This leaves one line that has a six pin FireWire and two closely positioned USB sockets.

I would have perhaps preferred the two USB sockets to be split either side of the FireWire as extracting one without removing the other was tricky. Perhaps the best idea would be to have a USB hub from a trailing lead. There are mouse and keyboard arrangements that work off a single USB or indeed Bluetooth one as you could insert a Bluetooth dongle in one of the sockets. However a printer or All In One is probably the prime candidate for the other socket unless you also run this Bluetoothly.

Telling you about the contents is not that easy. The price on the Evesham site is variable according to the content, each machine is built to order (stated at nine days) the processor in my unit was T7200 @ 2.0GHz +£79.99 but there are models from T2300 @ 1.66GHz. I had the 512MB memory model but 1GB can be purchased. All the hard drives are SATA and either 100 or 120GB. You can optional order any of the range of monitors that Evesham offer. After that things get easier as Mr Hobson's choice enters the arena. Everyone gets a DVD/CD-RW/Dual Layer DVD-RW drive, Digital TV Tuner, Windows XP Media Centre Edition (Free upgrade to Vista available), 90 day Bullguard Anti-Virus (upgradeable), Roxio Easy media Creator 7 and Microsoft Works 8. As stated there is an Ethernet port and should you require Wireless LAN this is an option at £14.99. 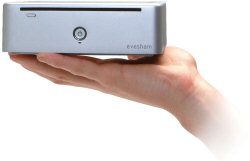 That last paragraph hopefully tells you what is extra and what you get however the link at the end goes direct to the page where the options are made via simple check boxes and should you want things like keyboard, mouse and docking station etc they can also be ordered there.

To clarify you get the Mini PC, dual headed monitor lead, power supply and remote control as standard, if you need other bits they will be extra.

The stated price for the base system is £738.95 including delivery. I think the model I had would add £79.99 to that figure.

It ran everything I gave it without any problem. I tested it with both Analogue and Digital monitors the latter was a rather nice LG 20inch offering that I watched several DVD's on without any complaint (review to follow shortly). My only gripes were the fact that the remote sensor is on the back and the two USB sockets are very close together. Size or should I say lack of it - as with notebooks - does come at a premium. Evesham part number MINIPCJAN07.