Do you wake up with a start when your alarm goes off? If you were in a deep sleep this can often make you grumpy and even tired all day. This could well be the solution.

Philips are now a leader in things for health benefits. I have been using this for three weeks now and I certainly feel better for it.

It is 29cm tall, 18cm wide and 12cm deep. The majority of the unit - all bar the bottom 8cm - is a white cover for the light - a screw in 100watt bulb - but this is not just any light. The ability to dim lights has been around for years normally operated by a switch. Here thirty minutes before the alarm goes off a minuscule amount of light starts to be sent out so little it makes a child's night light seem like a searchlight.

This very gradually starts increasing and by around ten minutes before the alarm there is enough light to see in a darkened room. Five minutes later it is quite bright and this ramps up to whatever maximum setting you have selected up to 400 Lux by the time the alarm sounds.

At the time set the alarm goes off this can be a variety of things including my favourite bird song. On the first morning I was really dead to the world when it went off very quietly at first and it was around two minutes later that it woke me. I had a late on the night before and when I got to bed I slept badly but even with only around three hours sleep I felt refreshed.

All the settings are easy to adjust and you probably will not need the ten page instruction manual. There is also a laminated card for quick setup.

The three natural sounds are Bird Song (my favourite) Frogs and Running Water. The last I think does not work for me as I immediately think wears the leak. Should you wish there is an in build FM Radio and you can set it to wake to any radio station of your choice but this I find jolts you awake thus getting rid of all the good work done by the light. 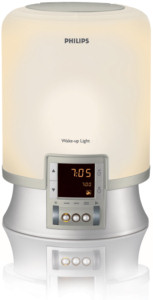 Some mornings the light itself wakes me. Like all alarm clocks there is a 'snooze' function by tapping the top of the light. You may think that this is not working as the light does not go out it just gives you nine minutes rest from the sounds.

In the middle of the top at the back is the button to turn it off, smaller and harder to reach but this ensures you need to turn it off deliberately.

Both the light intensity and sound volume can be adjusted by a scroll wheel either side of the orange display. This is certainly enough to read the time at night but not nearly as harsh as some other displays.

After the three weeks of use I am a much nicer person in the mornings, I have not had any extra sleep but I feel better and this can only be the effect of the gradual intensity increase of the light and when required the quiet start to the bird song.

Doing my Internet searches found the Philips Wake-up Light at a best price of £56.86 including free delivery from the first link below.

I have tried hard to find a problem with this and could not, my only hope was the stated £100 price from Philips themselves but the link given knocks £43 off that so I have no hesitation in recommending it for the very rarely awarded 5x5.

How do I change the bulb??
Rating:

I could do with this clock as I rise every morning at 4 a.m. for work.
Rating:

Although I reviewed this just as the morning were getting lighter now the clocks have gone back this will be ideal to get you gently from your slumbers.
Rating:

My son and dil bought me one of these a couple of years ago.  They really do work ~ slowly wake you up in the morning.  They also help you to go to sleep ~ like the sun going down.  Well worth the money if you are a grump in a morning, or worth buying one for a grump