A Hotel with Vacancies

Hotels appearing in games tend to be portrayed as establishments where you would not want to spend too much time. The hotels reputation is often sullied with tales of misadventure, missing residents, wandering spirits of which many are evil, and even the occasional murder. Take the Haunted Hotel featured in this next game for instance. 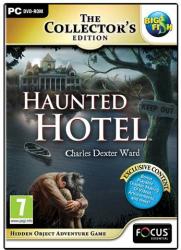 Subtitled Charles Dexter Ward and available in Collector’s Edition format from Focus Multimedia, this Haunted Hotel Hidden Object Adventure game sets you the task of finding the aforementioned Charles Dexter Ward who happens to be your brother who has mysteriously gone missing.  While the police and press believe Charles has just left town but you known differently as your brother always kept you informed as to his whereabouts.  The arrival of a small box stamped with a strange symbol and the letters “JC” confirm your suspicions that something is amiss especially when you open the box to find a chain that belongs to your brother.  There is also an address of a hotel in the middle of nowhere which directs you to the Haunted Hotel of the game’s title.

In common with most Collector’s Edition offerings, you will need to complete the main game before you are granted access to bonus items that include an extra chapter, the game soundtrack and concept art.  You also get an integrated Strategy Guide which can be accessed at any time.  The game offers two modes of play as you select from Casual or Expert with Casual mode giving you a faster recharge of the Hint and Skip features plus sparkles to indicate when an active zone is within the current scene.

A narrated opening sequence, which can be skipped if you are in a hurry to get to the main game, lays the groundwork for the events that are about to follow as you start with Day One of your search for your brother.  Optional interactive help is available to introduce you to some of the game’s features as sparkles indicate a Hidden Object scene and the cursor changes shape when different actions can be taken as you move around the environment of this hotel.

Your full screen view of your current location is overlaid with various tools and resources.  At the bottom of the screen are two pop-up panels which remain concealed until they are touched by the mouse cursor.  These panels contain your inventory items that you find or are rewarded with for completing a Hidden Object scene plus the tasks that need to be tackled in order to make progress.  Items in your inventory can be combined and will remain until they are no longer needed.  Also at the bottom of the screen, in the right corner, is the rechargeable Hint feature.  Links are provided to access the game’s main menu, strategy guide and info which provides a list of the missing pages you have found during your investigations.

When tackling a Hidden Object scene you have a full screen view containing the 12 items you need to locate.  All the items are accessible without needing to carry out any supplementary tasks.  The Hint feature can be used to indicate the position of any item you select from the list.  As a reward for finding all the objects, you will be rewarded will one of them and this will be automatically added to the inventory.

The game contains a varied mix of puzzle and mini-games.  While some of these can be solved with logic, others require a more trial and error approach while an occasional mini-game might require other types of skill.

As well as the missing pages, mentioned earlier, which provide background information to the story line, this game features 35 achievements.  These will be automatically awarded to you for completing specific tasks such as completing a hidden object scene without using a hint, making an elixir injection or navigating through a labyrinth.  A pop-up message will appear whenever you gain one of these achievements.

You will need to indulge in a far amount of backtracking as you visit the various locations making up this game.  No map is provided to help you so a good memory or map drawing ability will prove useful.  The graphics used in this game are up to the standard for the type of game play while there is also background music and atmospheric sound effects.  Spoken dialogue is limited to the introductory sequence.

While a little light in content, this game is well worth considering.  Priced at £10.20, the game requires a 1.0GHz processor with 1024MB of RAM and 854MB of hard disk space running Windows XP and later.