Rise of the Snow Queen

Witches never seem to rate highly on most people's popularity lists. Part of this unloved quality could be down to the actions of the Snow Queen, a central character in this next game. 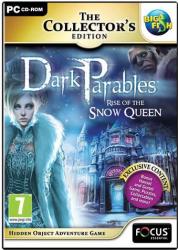 Originally published by Big Fish Games, Dark Parables Rise of the Snow Queen is now available from Focus Multimedia in Collector's Edition format.  As is usual in such cases, the bonus items making up this title, apart from the Strategy Guide, only become available once the main game has been completed.  Spread over eight chapters, the game is based around the evil Snow Queen who, helped by her monstrous henchman, has been busy kidnapping children and taking them to her mythical snow-bound kingdom.  You are cast in the role of the person entrusted with the task of rescuing the missing children and thwarting the wicked Queen's plans.

Before embarking on your task, you have the opportunity to adjust various settings that can include the volume levels for background music, the spoken dialogue delivered by the various characters, and general sound effects.  You can also select from a choice of three difficulty levels.  These have been designated as Casual, Normal and Hard.  The first two offer a faster/slower recharge of the Hint feature, more or less sparkles to identify interactive areas, an optional tutorial plus a shorter, longer delay before you are given the chance to skip one of the mini-games or puzzles.  If you decide to go for the Hard level then be prepared to work with no Hints, sparkles, and tutorial while all mini-games and puzzles must be completed.

A brief tutorial introduces you to the game's features if you have selected either of the first two difficulty levels.  These features include a mouse cursor that changes shape to indicate when different actions are possible plus the appearance of sparkles to identify areas of interest.  You will also get the opportunity to talk to a character who has a real voice to supplement the text dialogue.  Generally conversations can be brought to an end by selecting the Skip button.

Running across the bottom of the screen, when in Adventure mode, is your inventory.  This will store the items you find or are rewarded for completing a Hidden Object scene and solving one of the puzzles or mini-games.  A mini-map on the right of the inventory shows your current location and other areas that require an action to be completed.  On the left side of the inventory is the rechargeable Hint feature and this sits just above a Parables option.  Initially the Parables button will just give you access to a series of locked stories about the game's characters.  You will need to collect a series of gems that will unlock each of these stories and allow you to read them at your leisure.  When a story is unlocked you will be informed of the fact.

An outbreak of sparkles is the usual way of indicating that a Hidden Object scene is available.  Rather than present you with a text list of items to be located, you will be show a number of illustrations that are present in the main scene.  These illustrations are divided into three groups.  When all the items in each group have been located they will join together to form part of the required object.  When all three main sections have been formed then these will come together to make the completed object which then becomes your reward and this will be added to your inventory.  The use of images, rather than text, tended to encourage me to indulge in bouts of random clicking but this can result in a temporary screen freezing if you over-indulge in the use of the mouse.

As you explore the various well-drawn scenes you will come across a number of mini-games or puzzles plus items that have been designated as Cursed Objects.  These latter items have the ability to morph into different shapes.  In total there are 20 of these Cursed Objects and each one found will encourage the Hint feature to recharge at a faster rate.  Mini-games or puzzles, as mentioned earlier, can be skipped when playing in Casual or Normal mode.  However going down this route does involve a penalty.  If you skip a puzzle then the Hint feature will be disabled for a period of time.  Generally the puzzles involve switching objects to find their correct location or planning a route using the correct number of coloured stepping stones.

From time to time you will meet up with other characters that inhabit this game environment.  They will use real voices to support the text dialogue that appears.  You can either click through these sequences or take the Skip option located in the top right corner.  The same method can be used for the various cut-scenes that help develop the story line.

Once the main game has been completed then you will gain access to the bonus game offering of Hansel & Gretel.  After completed the bonus game, you will then be able to check out further extra items that include wallpapers, movie gallery, sound tracks and concept art.

Dark Parables Rise of the Snow Queen is a well-designed game that ticks all the correct boxes.  Perhaps the puzzles could be more varied and challenging but other than this the game plays well with great graphics, atmospheric sound effects and vocal conversations.  Requiring a 1.0 GHz processor with 512MB of RAM, 790MB of hard disk space and support for DirectX 9.0 running Windows XP and later, the game is priced at £10.20.