The Scuderia FS1 is a wireless Bluetooth speaker dock. The product forms part of the Ferrari by Logic3 collection of audio offerings. As you might suppose from the Ferrari influence the Scuderia has more than a touch of Italian style in its general appearance. 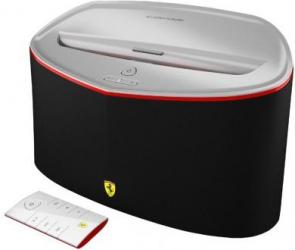 Opening the rather sturdy box (little chance of this product being damaged in transit) revealed that the Scuderia FS1 was packed so securely that it took a little time and plenty of effort to remove the foam rubber casing that totally encased the speaker unit.  Included in a separate box were power leads for use in the UK, Europe and America plus an audio lead with 3.5mm jack plugs at either end.  There is also a remote control, with the distinct Ferrari red colour, and two AAA batteries.

You also get a folded piece of A5 paper that purports to be a Quick Start Guide but fails to live up to expectations.  For example there are no instructions for making a Bluetooth pairing connection.  I shall return to this subject a little later.  This Guide also includes an illustration indicating that there is the possibility that you might need to download an app from the App Store.  However when I checked the App Store there was no Scuderia or Logic3 app and those that did contain the Ferrari name were paid-for downloads and did not seem to relate to the Scuderia FS1 product.

The appearance of the Scuderia FS1 is certainly striking with a colour scheme that brings together Apple White and Ferrari Red with matte silver and black material covering the front.  Shape-wise, the Scuderia FS1 adopts a squashed ovoid appearance with the top sliced off to reveal a mouth-like slot that contains the docking station.  Positioned just below the docking station is a button which doubles as a mode switching device and power on/off.  There is also a volume rocker.  Two circular silver speaker grills, like wide open eyes, are positioned on the Apple White rear of the unit.  A third grill, for the subwoofer, is on the slightly raised base.

Two cutaway sections are on either side of the subwoofer grill.  One of these sections contains some general information regarding specification, the other section has partially concealed connection sockets for mains power, Video Out, Aux In and USB.  The awkward positioning of these sockets is such that it is not the easiest task when attaching the required leads.  A case of appearance taking precedence over ease-of-use was my immediate thought.

The Scuderia FS1 offers three modes of accessing audio data from a variety of sources.  These modes are identified by an LED light that changes colour for each mode.  When the light is red then the music is being sourced via the docking station.  A green light indicates that the audio is delivered via the Aux In option while a blue light is used for Bluetooth.

In the past I have encountered some problems when attempting to get docking units to accept the presence of my iPod Classic.  They do not mind recharging it but refuse to play the music content stored on it.  However this was not the case with the Scuderia FS1.  It was quite happy to accept my iPod Classic, play its content and let me cycle backwards and forward through available tracks.  Other Apple iPod devices were also accepted.

Attaching an MP3 player to the Aux In socket, apart from having to lift up the Scuderia FS1 unit to gain access to the appropriate port, was straightforward.  Music output was fine.  You could adjust the volume level from either the top mounted controls or the remote control unit.  However I was unable to change tracks other that direct from the MP3 player’s own controls.

I did have some initial problems when attempting to pair various devices to the Scuderia FS1 via Bluetooth.  I tried devices running Windows Mobile, Apple iOS and Android without success.  No specific instructions were mentioned on the Quick Start Guide other than Bluetooth mode was indicated by a blue light.  In order to put the Scuderia FS1 into pairing mode once the Blue light appears you need to hold down the Power button for ten seconds before attempting to pair a device.  I received this information from the technical support team but it is also available if you take the trouble to download the product’s User Manual.

While the Scuderia FS1 ticks the right boxes with regards to its appearance and audio performance, there are a couple of issues that need to be taken into consideration.  The location of the various connection sockets does not make for easy connections.  Even worse was the lack of a User Guide to aid the setting up of some features.  You should not need to download such documentation in order to get the full benefits of a product.

Usually when starting a review I have some idea of the price of the product.  This was one of those occasions when I only discovered this information once the review process had been completed.  I must say that my jaw dropped slightly when I was told that the Scuderia was priced at £399.00.  The product is currently available from Selfridges.