I am fairly certain that when I started talking about Christmas items six weeks ago most thought I must have lost my marbles, here in the sixth of my series I tell you about a new game from Ravensburger and perhaps the best known board game of all Monopoly. 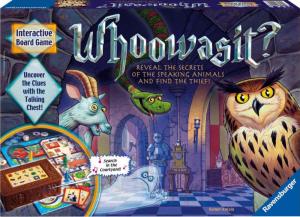 ‘Reveal the secrets of the speaking animals and find the thief!’ is the tag line on the front of the box. It is a game for two to four players and the stated age is from ‘7 up’. You need to find a missing ring as it protects the Kingdom from the evil wizard who is on his way. Who has stolen the ring find that and you have solved the simple version.

There is an eight page well illustrated A4 booklet with the rules for the all three versions of the game the latter ones involve the dungeon and tower.

Clues have to be found from talking animals and these seem to like being fed, however there is a talking chest (requires 3xAA batteries not supplied). This can give clues, with things like Harry Potter being popular then this has a good chance of catching on.

The game board is 52x36cm and is eleven rooms of the Kings castle. Some of the pieces are plastic while other props are push out good quality cardboard. The talking box is the heart of the game and here is a way to find the ring.

This is a brand new game from a quality jigsaw puzzle maker they do have a few other games but it is not cheap so surely three ‘AA’ batteries could have been provided. I would hate to be a parent searching for batteries on Christmas Day. 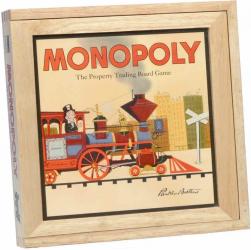 There have been dozens of different versions of Monopoly over the seventy odd years. Some have been electronic, some have been totally different a football version comes to mind, but being a mature person I come back to the original with original property valves, this version comes in a fine wooden box with wooden houses.

One small change for the modern age is that the box is smaller so the board has to fold into four rather than the original two. The age range is ‘8+’ and the game is for two to six players.

The box is 26x26x5cm and has a slide off wooden lid. There are red wooden hotels and green wooden houses. The playing pieces are metal (not plastic) the other parts the various card types are cardboard and of course the money is paper.

The bottom part of the box can be used as a bank as the various money values all have slots to keep them in position.

The rules are a folded thick laminated paper sheet, five of the six sides are the original rules but the game did always have a problem in that it could go on for far to long for most families so the last side has a limited time version that can be ideal for busy families.

Of course the young will find the old train on the front fascinating and while older children seem to shy away from board games the young playing with parents and grand parents will love the quality of the whole package.

This version of Monopoly is available from the link below for £25.94 including delivery.