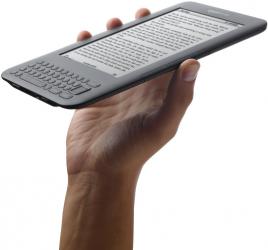 The latest Amazon Kindle measures 19x12x.5cm and weights only 230grams, the viewable screen is 9x12.2cm giving a diagonal screen measurement of 6inches.

When off the screen displays one of a range of wonderful monochrome graphics, these graphics use no power.

The controls are simple, both the left and right edges have < and > keys to move page forward and page back. The bottom has a volume up and down rocker, 3.5mm headphone/earbud socket a micro USB socket and on/off slider.

Just below the screen is a 34 key keyboard made up of .5cm round slightly raised letters there are also Home. Back Menu keys as well as the ubiquitous five position joystick, these together with the menus complete the controls.

Having reviewed other such devices both those with E-Ink like this and without the screen is far less reflective than most others and the slate grey graphite surround does not show fingers like shiny black surfaces do.

Of course Amazon sell you books that are delivered by ‘Wispersync’ this means they are sent electronically direct to your Kindle, normally within a minute of you purchasing them, no computer connection is required as the system uses mobile signals (no cost to you) to deliver them. 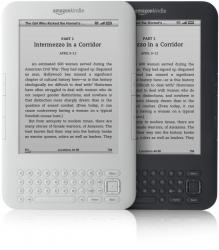 It is even possible to order direct from the Kindle but this does take longer than with a normal computer as the 6inch screen needs to be magnified after it is drawn to allow you to do so, but if you can get a signal it is possible.

Apart from the books it can play MP3 files. To get these onto the device you will need to use the cable provided but once on they can be played through a setting called ‘experimental’ and I found that the built in speakers in the back of the unit gave a good volume of sound for personal listening, however the earbud/headphone socket is there to allow you listen privately. You can of course listen whilst you read.

Another feature under ‘experimental’ is text to speech, on earlier models I found this less than reliable but on this unit all worked correctly. Often by the evening my old eyes are knackered and while I would love to read my eyes object. I have had the Kindle read to me a lot of the books that I have purchased, if I have a complaint it is that the voice reads a little fast it would be nice to have a control to slow it down by say 10-15%.

Certainly not the cheapest Book Reader around but I do think it’s the best, the text on the screen is always razor sharp. The default is to show 24 lines of text per page and even 35cm away I found it very readable. There are eight sizes of text all choosable from a single button push (default is size three) so there is a lot of size enlargement available if required. There are also three typefaces and you can also select the number of words per line. Finally all four ways can be set for screen display so the keyboard can be bottom, left, top or right, not an automatic change as with some devices but I often found that they could rotate when you did not want it.

For those wanting to learn then it comes with a built in dictionary to explain any words that are not understandable.

This review is simply superb and covered all the features and point-to-point explanation regarding the gadgets are superb. http://www.getreviewz.com