Another couple of items shown at the Marks and Spencer Christmas In July event. First a somewhat strange combination an FM radio and a flask. Second a game that has been around for years Cludeo, this time in a new format.

£15 from Marks and Spencer 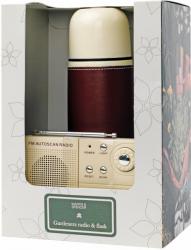 What took my eye was the radio and only when I tried to find out the price did I find it was paired with a flask.

It is 20cm tall and 6cm across the capacity is stated at .35 litres. It has a removable leather style cover and best of all the dimensions are the same throughout for ease of cleaning. Apart from a small cap/drinking cup there are two inner lids meaning that items stay hot or cold longer.

The radio (mine was brown) comes in two parts with the speaker and four part rod aerial (22cm) on the left and the controls on the right. Initially this seems strange as you need both parts to hear the radio. In fact if you use the supplied earbuds you don’t as they act as the aerial and where the speaker part plugs in is a 3.5mm jack plug.

It is in complete form 12.5x6.5x2cm, remove the speaker part and the fist figure becomes 6.5cm.

On the back of the left part (the speaker side) is a pull out prop to allow you to have it tilted back by 30 degrees from vertical. The right half has a belt clip on the back. The top has an LED light while the front has three push buttons, Reset, Scan and Light and a red LED when power is on. Also on the front is a circular volume on/off knob.

It is powered by two ‘AA’ batteries that fit behind a slide door in the rear. Tuning is just a matter of pressing the scan button and it stops when it finds a station. Now if you are looking a particular station this could take a while. In my tests I found it reverts to the first station after a switch off. The 3.5cm circular speaker gives an okay sound at low volumes. This is not hi fidelity but for someone working in the garden or allotment it can be music or maybe a play to work with. The belt buckle works well when you are moving around but unless you return home after dark I see little use for the LED light but then again do you know where a working torch is should you have a power cut.

Certainly an unusual combination and strangely enough one that could see use. The combined package is priced at £15 and is available on the Marks and Spencer web-site on the following link : 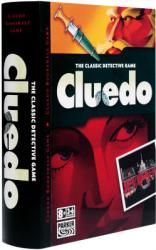 It should also be available from their larger shops. An unusual gift that is likely to get used by anyone who spends time outdoors.

I actually asked to review Monopoly but was sent Cluedo however Marks & Spencer will do both and both in a unique form of a largish book. It is 26.5x20x6cm and will sit happily on any bookshelf. The stated price is £19.50 and I think with everything including a full sized board collapsing into the book it has a good chance of keeping everything together.

The slogan on a band round the book is perfect ‘The Game that’s perfect for any bookshelf…’ Open the book and remove the board it is folded (strongly) into six and when open is 46.5cm square. Next are eight sides of rules. Now in special sections are the all important envelope where the answer lies, a set of six pencils, marking cards, the actual playing cards and the various weapons and people.

While I only saw the boxed book version of Monopoly from the outside if the contents are of the quality of the Cluedo I was sent it will be a nice present and of course more people have a bookshelf than do have an empty space for a large boxed game so it is far more likely to stay in view than end up under a bed or worst still in the loft.

You can get full details of "Cluedo - Bookshelf Edition from Marks and Spencer on the following link :