This is the first of a series of reviews on what Marks & Spencer have to offer in the gift line up for the coming season. Here I am looking at two well known packages, first Chess and Draughts and second an anniversary edition of Scrabble, both come with impressive wooden containers, pieces and boards. 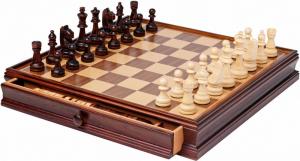 This is in fact both a chess and draughts set as both sets of pieces are supplied in the drawer under the board.

The board is 37x37x6cm and would make a wonderful gift for anyone keen on chess of for the younger members of the family with draughts.

The pieces are not as you might think black and white but cream and brown that match the squares on the board. The king is 3.2 inches tall while the pawns are exactly half that at 1.6inches. All the pieces have a felt base for smooth movement on the highly polished board.

The lined drawer is divided into 32 sections one for each piece with a further two larger sections at the front for the twenty four matching draughts men. The drawer is a tight fit and is 33cm wide and only pulls out 31cm meaning that the back row of chess men are only exposed enough to take them out.

No doubt with use the drawer will become a little looser but it is no bad thing as it will never open by accident thus spilling the pieces.

A nice item with a price of £20, surely a nice present or gift. As I only saw a pre production unit I cannot be sure but my item came without rules for either game and while you can by thousands of books on how to improve your chess a brief booklet outlining the rules of both games should surely be included.

The board is 33x33x1.5cm and under this is a fitted turntable for smooth rotation. While Scrabble was around even when I was a child this is probably the nicest version I have seen, apart from the board being made of wood so are the racks and of course the letters.

The board forms the lid of the box when not in use and of course the letters are stored in a velvet effect bag. Two four sided copies of the rules are supplied. Finally there is a score pad and pencil and should you wish to provide this as a presentation a brass plaque is provided all ready for you to get engraved.

When I first saw this in the summer I was expecting the price to be considerably higher given the price of a standard version of the game.

The base of the box is 33x33x4.5cm and gives the whole thing a very impressive appearance. The only thing missing in my mind is either a dictionary or maybe one of those specialised Scrabble books with those strange words that probably win the game.

I was told that the Anniversary Edition of Scrabble would be available at £20 and I think that given the construction of it that would be money well spend.

No doubt by the time you read this both will be available on their website http://www.marksandspencer.com/ or at least in their larger shops.