Deal or no Deal

Countdown was the first program on Channel 4 when it launched, now there is another quiz show on that channel that has a huge audience Drummond Park licence two versions of the game in the UK. 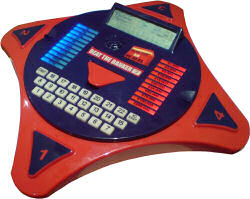 One of the gems I saw at Dream Toys this year a certain hit, maybe almost as big 'can I have a 'P' please Bob' in case you are not old enough that was an ITV quiz called Blockbusters.

There are two versions of this game a board version and a console version, the latter is the one for me. First a disappointment it requires 4xAA batteries and they are not supplied. This is mentioned but it's under the Drummond Park logo on the bottom left of the box cover and quiet easy to miss.

The console is 34cm from corner to corner and less than 5cm thick. It is nearly square but slightly sculpted and red in colour with four blue triangles with red numbers 1 to 4 in the corners. The centre 20centimentres is a revolving unit that you move to the point in front of the player number. While this can be played alone it can equally well be player by 2, 3 or 4 players as the other players never know if you have answered Deal or no Deal.

The central console contains an 8.5x2cm three line LCD display clear enough but not that outstanding. The eleven blue amounts (1p to £750) are down the left and go out when selected, the right side has the eleven higher red amounts (£1,000 to £250,000).

Directly in front of you are three rows of numbered buttons 1-7, 8-15 and swap 16-22 and no swap. The important near centre red triangle hides the on/off button and the deal and no deal buttons. A single finger goes under this flap and no one will be aware if you have pressed the left or right button. It is not possible to inadvertently press the on/off button as there are several warnings on the LCD display. The bottom of the LCD display shows the numbers of the boxes not yet selected over the lower two lines as well as a larger representation of your box number.

The sounds through the speaker just below the LCD display are clear as well the all important phone ringing sound when the banker makes his offers throughout the game.

The main differences between this and the TV version is that up to four can play and this is well implemented and of course no adverts to sit through.

While I also saw the board game version I think the console version is far superior. It is stated to be for age 8 upwards and anyone who has seen the TV version will have no problems playing it.

The instructions are a double sided A4 sheet folded into three with plenty of illustrations but once you have inserted the batteries and found the on/off switch all the instructions are on the LCD display, from selecting the number of players and rotating the central console to the appropriate player number.

The sound is not overally loud but can be turned off if required. A nice game well implemented, the only down points 'batteries not supplied' and the LCD display could be better.

So for anyone spending £24.99 this Christmas don't forget that you also need 4x'AA' batteries.

My mom is a big fan of the gameshow deal or no deal. She would like to know what city and state the gameshow is held. And how to become a contestant. Please e-mail me if you know. Thanks,Nora Toole.
Rating:

Figures released this week by NPD Group, the market research agency which quantitatively monitors the UKs top toy retailers (accounting for 71% of sales nationwide) reveal that the Top Toy for December 2006 is not a toy its a board game. Yes it's DEal or no Deal.
Rating:

Whilst initially a very god game, I have had cause to return 3 consoles to he shops. It appears that you play with them half a dozen times and either the LCD display does not work or none of the buttons work at all. Same problem with each game, even when the batteries are replaced. The store where I purchased them even hinted that there may be a major problem as they have had an enormous amount returned. The hird occason I just had a refund and have since opted to buy the DVD game....absolutely great. BEWARE those of you who have wrapped them up for christmas. I fear there will be a lot of disappointed kids after christmas!!