This is the first of the cameras from the GE camera launch in January. A new name in cameras so how will the units work out in practice, especially as they are the only manufacturer to promise one manual for all the models. 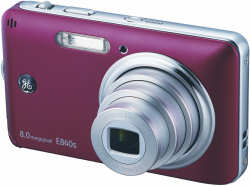 The General Electric E840s digital camera is 10.5x5.5x2cm the width the last figure can increase by another 2.5cm when it is fully zoomed. It weights 130grams. My unit was black and silver.

This is described as an 8megapixel unit and it 4x optical zoom. In macro mode you can focus as close as 6cm and in normal (wide angle) 60cm and with telephoto 80cm.

Going round the controls the from has the lens 6.05-24.2mm (that's a 35mm equivalent of 37-148mm) and the decent flash mounted above and to it's right at the nearest it's 2cm from the lens. The right side has the anchor point for the obligatory wrist strap. The top has the on/off button, the shutter release and the wide angle/telephoto rocker. The base has anchor point for the tripod and the covered battery bay that also holds any SD card you might use.

This leaves the back dominated by the 5.5x4cm TFT display. To it's right are two wheels and three buttons that control the unit. The top wheel has eight positions and the illustrations are reasonably clear as to what each setting does, however as you change a fuller explanation appears on the TFT display and of course if you need more it's in the manual. The bottom wheel is the ubiquitous five position joystick which allows temporary changes to be made to some features, as an example the flash settings, however on next turn on they return to whatever you have set in the deeper menus. Of the three buttons the waste basket and menu are clear the other is 'smile' and more of that shortly.

There are three compression modes (Best, Fine and Normal) and eight image sizes. 8MP, 7MP (3:2), 6MP (16:9), 5MP, 3MP, 2MP, 1MP and VGA. These two features can be changed from two clicks on the middle of the joystick the function button. If you are in movie mode you have the choice of 15 or 30FPS at either 640x480 or 320x240. Picture quality was fine for chips for You Tube or the like. However the sound was not that great (terrible when replayed on the camera) and for more than short clips use a camcorder as that has better sound quality. But for holiday clips kids playing on the beech etc it is fine. 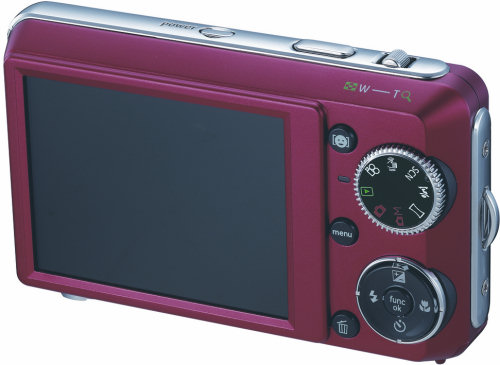 The smile feature is something new and once activated (by pushing the smile button) you can focus on the subject press the shutter all the way down and wait, in theory anyway assuming your hand does not get tired as soon as a smile is detected the image is taken. I found it a bit hit and miss.

The other -more normal- features of face detection, panorama and red eye worked better but they are features that most recent digital cameras offer.

There is a small amount of internal memory (24MB) so you could take a few images without an SD card. With the cards so cheap now (I have seen 1GB cards for a few pounds) buy yourself two 1GB cards) one in use and one for spare. That's over 800 images in 5MP mode using fine compression. However the battery will probably only take around 200 images between charges.

While the idea of one manual for all models is fine in theory it means you have to look carefully at what applies to which models and maybe one manual for each of the three ranges would be a little less confusing.

I was happy with images taken in daylight and flash and also with the movie quality (but not the sound) and this could become a perfectly acceptable brand name.

Doing my Internet searches could not yet find the GE E840s prices below £100 (including shipping), which would be good value as the stated price is around £110. From Amazon each of the three available colours is available, including shipping, for £104.76. The following link shows all three colours :

The UK site should be available soon.