This is by no means a new program but it is still available from the link at the end and also possibly from their dealers. Bridge is a game I enjoy however I would be the first to admit I am lousy at counting cards, so if this is you as well then this could help. 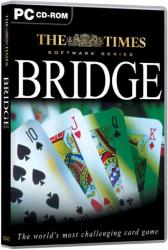 Downsides first it will not work with 64bit Windows. If you have Vista then the help module will not work out of the DVD case it comes in. Next I found that the installer hangs so I suggest you run Setup.exe from the provided CD-ROM.

You might think it is not worth the trouble but having tried several Bridge games I find this the easiest to use (once it’s installed). I installed on both an XP and a Vista system, it takes three minutes (from running setup.exe) and 17MB of hard disk space.

The help manual is a separate icon (only available with XP) and is split into three sections, How to Play Bridge, Getting Started and Settings. If you are a total novice start here if not I suggest you just start playing Bridge from the other icon. However the five tips although basic could well improve a basic players game a little.

By default you are south which is quite often the way with the Bridge games I have used. West, North and East cards are dealt face down and yours face up, as you are the only player this is not important and you do need to see your cards in order to bid.

The centre of the table is occupied by a simple bidding entry system a total of nine clear columns the top line is 1C 1D 1H 1S 1N then according to the dealer E S W N. The next line is 2 and the third line 3 etc etc. The eighth line is Double and Redouble and the ninth line pass.

According to the values you have you select your bid (the computer bids for the other three hands. Your can only bid a higher amount (or pass) than the hand before you. The earlier bids are displayed and all unavailable options are greyed out.

Once the contract is decided it is shown top left as example 3H by West not Vulnerable. Your partner (North) then leads and after West plays you select (using the mouse) what to play from your hand. Once you play then East completes the trick. The played cards are all shown in the centre of the Window and then cleared automatically by the computer. They are then placed face down in either the East/West area (to the right of your cards) or the North/South area to the left according to who won the trick. The next trick is started by the player who won the last trick until all 13 tricks are decided or the computer asks if it can claim all the rest of the tricks. I found that it never makes a mistake (remember it knows all the cards) and this can save time. It can take the remaining tricks for you or East-West according to or course who has the winning cards.

Once you have mastered the basics the options menu lets you select the bidding system, for beginners Acol (default) 5 Card Majors or Standard American. For Experts Acol, 5 Card Majors or Standard American. There are also Four Custom Systems great for those who play with a special partner who will only play a certain way. There are no less than 33 other choices under an advanced button so it should really be able to cope with almost anything.

While the problems make it unusable on 64 bit Windows it will work on 32 bit versions, its unfussy and allows you so many choices your Bridge really should improve. I am not saying you will become a master but you should not be a liability either.

It should be available from dealers or direct from the link below at £9.99. They also lots of other games available.