Here I am ensconced in self-isolation in order to avoid coronavirus, looking at a product from MenKind. 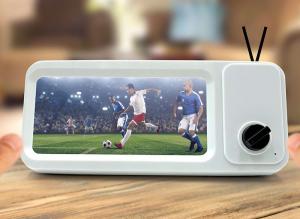 It has to be noticed that several years, actually a full decade, had passed since I last reviewed a MenKind product that went by the name of Dave the Monkey.  Sad to say, I was unable to locate Dave the Monkey on the company's website.  However I do have the company's 3in1 Smart Viewer to occupy my time during the period of self-isolation.

According to the company's blurb, this product provides the means of watching videos on a retro-style stand while delivering charging and audio boost capabilities.  You might suppose this is a reasonable impressive feature list but I did omit one word from the company's description which might make a difference.  That word was "smartphone" and the product does require the presence of a smartphone, provided by the user, to be able to perform any of its functions.

This 3in1 Smart Viewer is basically a shell unit.  It forms part of the company's RED5 brand and is decked out in white and black with dimensions of 203 x 87 x 64 mm (W x H x D).  Dominating the white front of this product is a slip-in compartment for holding the smartphone that will provide the video and audio content to entertain those using this kit.  Next to the area taken over by the smartphone is a control knob whose purpose is to adjust the audio volume level.

With or without a hosted smartphone addition, the appearance of this 3-in1 Smart Viewer was unlike any retro-style viewing unit that I could dredge up from my flaky memory.  Even when I added the supplied V-shaped dummy aerial into the two holes on the top right of the stand, it did not bring any memories flooding back of any boyhood viewing sessions of watching a black and white television.

The rear of this stand features a ventilated speaker outlet and connections for power and the audio input that is being streamed alongside the associated video.  While a lead is provided for connecting to a power source, you will need to supply the audio lead that will link to the smartphone's audio output.  Setting up this device is straightforward as you slot in the chosen smartphone, that will provide the content for watching and listening to, plus attach the power and audio leads.  However you do need to be aware that there are some issues that need to be considered.

Even when using a smartphone that sits comfortable within the slip-in compartment, there could be a possible problem when moving the stand with the smartphone in situ.  You need to be careful when handling the unit as there is no facility for fastening the smartphone in place.  The smartphone could slip out of the stand, fall to the floor, and thus damage itself.

For the audio aspect of this kit, you need to provide an audio lead to link the smartphone to the stand unit.  This should amplify the sound from the smartphone but I was unable to detect any difference.  For this feature to work, the smartphone needs to be compatible with induction technology.

As part of its feature set, the 3in1 Smart Viewer has the ability to double as a wireless charger.  It can charge the smartphone to ensure its internal battery does not run dry.  However, in order for the wireless facility to work, the smartphone will need to be Qi compatible.

The 3in1 Smart Viewer can provide a useful facility but, for many, will not live up to its title due to the demands that are placed on the required smartphone.  While you could use the stand with a smartphone that does not fit the requirements, this would mean missing out on certain features and you still might encounter the problem of the smartphone falling out when moving the stand.  MenKind has priced this product at £15.00.