Ever since the original launch, my smartphone of choice has been the Motorola Moto G device which combines good performance with a reasonable price point. Motorola has recently upgrading this excellent handset with the new second generation version which is available in single or dual SIM flavours with a choice of either 8GB or 16GB. Also included with this second generation of the product is a micro SD card slot enabling the user to increase storage by a further 32GB. 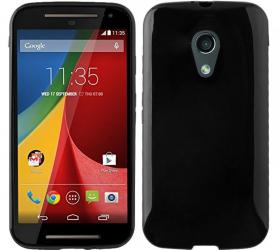 When purchasing this new Moto G handset you have a choice of colours while Motorola has retained the customisation feature of replaceable back and flip type shells.  The new version of the Moto G is slightly larger at 70.7 x 141.5mm (W x H) than the original offerings 66 x 130mm (H x W).  As a result any peripherals, such as covers, from the original model will not fit with this all-new version. There is also an increase in the weight which rises by 6g up to 149g.

The resulting increase in size has enabled Motorola to fit a 5-inch screen to the front of the handset.  Covered by scratch resistant Corning Gorilla Glass, this 5-inch screen delivers the same resolution as the previous model.  You get a resolution of 720p HD at 720 x 1280 at 294dpi.  Whether reading text, watching videos or playing games, screen quality is of a high standard.

Like the original version of the Moto G, processor details remain the same.  Beating at its heart is a Qualcomm Snapdragon 400 processor with a 1.2GHz quad core CPU, with an Adreno 305 @450MHz GPU and 1GB of RAM memory.  Power is provided by a 2070 mAh fixed battery pack.  As mentioned earlier there is a choice of 8 or 16GB of internal storage with the option to add an SD memory card to add up to a further 32GB of space for those videos and music tracks that eat up space when providing entertainment on the move.

With the 5-inch display sandwiched between them, silver-coloured stereo speakers are positioned at the top and bottom of the Moto G’s front.  The front also has a 2MP camera for those “selfies” that are all the rage or when conducting a video call.  As usual the unit’s main camera is located on the rear of the unit.  This camera is an 8MP model with auto-focus capability that generally works fine unless you are suffering from the shakes.  Captured images and video clips were of a reasonable standard.

All the external controls and connection options retain the same positioning as with the original Moto G.  Conveniently positioned for right handed users is the power button just above the volume rocker on the right side of the handset.  A micro USB port, for charging the handset and connecting to a computer, is located at the base of the handset while a 3.5mm jack socket for attaching a headset sits at the top of the unit.

Whether you opt for the single or dual SIM version of the Moto G, you will at some time need to remove the handset’s back cover.  The slot(s) for the SIM card(s) are clearly labelled.  With two SIMs installed, one for business and one for personal use, you can accept both types of calls using different ring tones from a single device.

You can also take this opportunity to insert a micro SD card in its clearly labelled slot and increase storing space by as much as 32GB.  Removing the back cover of the Moto G is one of those operations that could put a fingernail at risk as you ply the cover away from the rest of the unit.  I found that a nail file helped with the removal of the back cover.  Replacing the cover was a far easier task as it just clips into place.

As is Motorola’s usual approach, this handset comes with the latest version of the Android operating system which, in this case, is Android 4.4 (KitKat).  Not only do you get the latest version of Android but also a guaranteed upgrade to the “L” version soon after it appears.  Motorola can make this claim of a quick upgrade due to its policy of keeping to a fairly vanilla flavour of Android with only one or two minor additions to the basic version.

A fairly standard 3-second press of the power button is required to activate the handset’s start-up process from cold.  Approximately a further 25 seconds (slightly faster than the original Moto G) is taken up as you arrive at the Lock screen.  Making and receiving calls, running various apps, surfing the web, playing games and other types of entertainment were all tackled without any problems by this second generation Moto G.  For general use the Moto G’s battery should provide a few days of power.  For heavy duty use, such as watching HD movies with a Bluetooth connection to boost the audio, I was able to get a full five hours of playback.

Introduced with the original Moto G was Motorola’s Migrate app.  Using this piece of software it is relatively easy to transfer content from your existing handset to the new Moto G.  By default Motorola Migrate comes pre-installed on the Moto G and you just need to download and install it on your old handset of whatever brand before selecting the items you wished transferred from the old to the new.

Currently Amazon has the dual SIM, 8GB version of this excellent handset listed at £144.99.