A phone with a keyboard that slips out of the side. It of course does everything else a phone does nowadays such as email, messages, Internet, camera, ironing and washing up, well maybe not the last two but they well could soon. 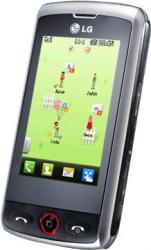 The GW520 from LG measures 10.5x5x1.5cm, with keyboard out the middle figure the width increases to 8.5cm. It weights only 125grams. It has a black screen surround and sides the rest is silver grey. The touchscreen is 6x3.5cm.

There are just three buttons below the touchscreen, these are ‘call’, ‘multi-tasking’ and ‘end’, the last mentioned is also the on/off button. It takes four seconds to switch it off and sixteen seconds to switch the unit on.

There is a small user guide of 98 pages but unless you have only used a really basic phone previously you will probably find your way round using the four icons and their sub icons at the base of the screen to find almost everything you require.

The slide out keyboard has four rows of ten keys all of the same size apart from the first and sixth on the bottom row that are smaller but as I defy anyone to use more than two thumbs on the keys it should not matter that much. These two keys are smaller to allow for the slight curve towards the bottom of the pull out of the keyboard. The unit sits nicely on the fingers and the younger and more agile will get up a good speed typing.

The left side has the volume up/down keys while the right side has camera key, unlock key and a tiny bung that any micro SD card fits behind. The base is clear as is the back apart from the 3MP camera mounted near the top and on the top another bung covering micro USB socket (charger) that also doubles as the supplied earbud socket.

The four icons at the base of the screen are green to go to dialling mode, light green for your address book, yellow for ‘messaging’ and blue ‘communications’. 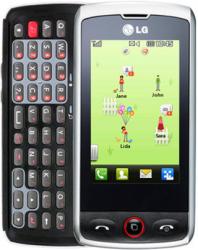 The ‘communications’ has four icons on the right side a green phone that has Contacts, Recent History, Messaging, E-Mail and Dialling. A clapperboard that has Camera, Video Camera, Gallery, My Stuff, Music, Muvee Studio, Games and Apps and FM Radio. A yellow rectangle is the Utilities folder; this has Browser, Google, Alarm, Organiser, Memo, Voice Recorder and Tools. The last named has Calculator, Unit Converter, World Clock, Stopwatch and this is where I expected to find the ironing and washing up icons to be. Finally the settings icon (like a cog wheel) this has Profiles, Screen Settings, Phone Settings, Call Settings, Bluetooth, Touch Settings and Connectivity.

In (default) normal use it has a rather garish yellow and white background with an analogue clock in the centre; the four icons mentioned above are at the bottom and the normal top line with signal strength, volume, battery strength and a digital clock. Your SIM providers name is just above the four icons at the bottom of the screen.

The back slides off (a little too easily) to allow you to get at the battery and insert or remove your SIM card from the phone. I found the camera (and video camera) quite good and while other phones has a higher mega pixel rate a decent A4 image can be printed if you take a reasonable image with a 3MP camera.

As always finding a price for a new phone is difficult, you will probably get one cheaply or possibly even free if you want a contract. Getting this on Pay as you Go will not be cheap but as always do a round of the phone shops just to see what is available.

As an example I looked at the link below and they offered it from free (contract), £170 (pay as you go) and £279.95 (unlocked phone only). This should give you a basic idea but always check what is on offer to get the best deal.