This is a touch screen phone (no keyboard) but for those whose handwriting is better than mine almost everything can be written using the provided stylus, however there is a soft keypad for people like me. 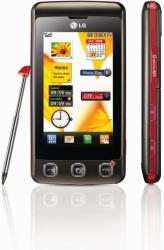 The KP500 mobile phone from LG, also referred to as 'Cookie' measures 10.5x5.5x1cm and weights less than 90grams. Mine was black with a metallic grey strip around the edge. The face has a 6.5x4cm screen.

The 140 page User Guide is very comprehensive. The face of the unit has three buttons below the screen. The right side has the insertion point for the 5cm long stylus that expands to 7.5cm for easier writing this unusually for a stylus goes horizontally along the base of the unit. There are two buttons as you work up the side and then the insertion point for a micro SD card. The top and the base are clear while the left side has two further buttons a door covering the earbuds and power input point and the top corner has a wrist strap connector.

This leaves the back where the lens for the camera is (top left) and the bottom half of the back slides down to reveal the battery which needs to be removed to insert or remove your SIM card.

When you turn on the screen on there are four soft buttons at the base of the screen. The very top of the screen has up to six small icons. The rest of the area is clear apart from any design you may install however thumbnail images of people you often call can be displayed and clicking on anyone gives option to phone, email, message or Delete their image.

Pressing the rightmost of the four icons along the screen bottom will enter you into the Communicate screen that itself has seven icons, Dialling, Speed Dials, Contacts, Call History, New Message, New Email and Messaging. There are four icons down the side and the icons mentioned relate to the phone icon at the top. If you press the clapperboard (second icon) you get eight new icons in two columns of four. Gallery, My Stuff, Camera, Video Camera, Movie Studio, Music, FM Radio and Games and Apps. The next icon down on the right side shows the seven icons in the Utilities menu, Browser, Organiser, Alarms, Voice Recorder, Drawing Panel, Tools and Sim Tool Kit. The final icon (cog Wheel) gives the seven icons for the Settings menu. Profiles, Screen Settings, Phone Settings, Call Settings, Touch Settings, Bluetooth and Connectivity. Details of what all these settings – and much more – can be found in the excellent User Guide.

The three keys below the keyboard are fairly clear the left key (green phone) is where you get a soft keyboard on the screen allowing you to enter a phone number, if it finds it has been called before you are unlikely to have to completely enter it, however I found the screen this gives confusing as it says dialling and it is not until you press another key. The centre key is the multitasking key which brings up Favourite Apps screen. The right key (red phone) ends a call and is also used to switch the phone off three seconds and another press of three seconds will start the process of turning it on. This takes around twenty seconds to arrive at the phones desktop, I found it then took maybe another ten seconds to go from ‘Emergency Only’ to being able to dial a number. The red phone button also backs you out from whatever action screen you are currently on.

A nice feature is when you are entering alpha/numeric characters in the vertical position you have the normal phone type keypad, but, turn it 90degrees and it becomes a full QWERTY keypad.

I found that on occasions I lost connections (about five times in total during my review period) and I needed to remove the battery and push the Sim in slightly as it has moved a tiny bit. Now I am not sure if that is because my Sim has been inserted many times in many phones or if the design here is at fault as even when pushed fully in there is no distinct click.

Finally the camera can take images up to 3MP 2048x1536, these were okay but of course not the quality associated with a digital camera. The favourite pastime of many seems to be taking video images with mobile phones and of course this can do that.

Finding prices for phones is a difficult task and perhaps one of the few things where currently you may get a better deal at your local phone shop than online, bargaining still can work here. The box says the LG KP500 is called Free Touch but the information on the link below calls it the LG Cookie. I found it available free on contract from the link below or at less than £100 on Pay As You Go.