Not as yet a single product, the first an analogue clock that looks like it is a phone, the second a device that is likely to more required as global warming increases even in the UK for removing the discomfort of insect and mosquito bites. 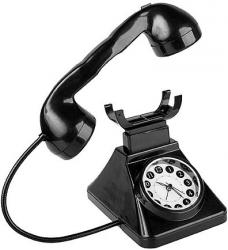 This looks like a rather shinny telephone of around 60 years ago, the dial is an analogue clock controlled by batteries in its base it has a sweep second hand and an alarm (however remember being analogue it’s a 12 hour clock).

The clock runs off three ‘C’ cells (sometimes called R14) here I think these could have been replaced by rechargeable ones or even a solid rechargeable battery that could be charged from the USB and thus no extra cost.

Lift the receiver and a single LED shines over the dial from the one o clock position lift it again and that LED goes out.

Certainly a gimmick but it does look quite smart on a desk and with the clock it is functional, perhaps the most useful feature is the 12 LED light that can allow you to investigate a dark corner without looking for a decent torch.

It comes with a 90cm USB lead but by using an extender lead you can give yourself a far longer lead length, the handset has a 20cm very stiff lead from the base of the unit and here the batteries serve a purpose of stopping it being top heavy.

The Retro Telephone Clock with light is available from the link below for $29 (US) + $3 (US) P&P whatever the size of your order. 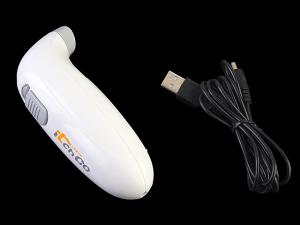 It is the size of a small electric razor, the name on the back says ‘itch go’ and this is indeed the purpose of the unit.

It is 16cm long with USB lead attached to the back (3cm less without it) and about 4cm across and a maximum of 5.5cm deep at the head. The back of the unit has a slider to turn power on and this also shows a blue LED.

The 1.5x1cm head shows a cream coloured light when switched on. While it is stated that use cannot burn the skin you are told to turn it off two or three seconds after a burning sensation and symptoms will be alleviated or will disappear.

While mosquitos are currently not a huge problem in the UK bee, wasp, fleas, lice and other stinging insects are. The supplied USB lead is just over 1.5metres long and should allow you to reach most parts of the body easily.

While I have avoided any bee or wasp stings so far this year I have used it with some success on the odd spot that was probably caused by a bite from some sort of insect.

The Itching Removal Instrument is available from the link below for $15 (US) + $3 (US) P&P whatever the size of your order.