Due to a rearrangement in the way Acer contact their press relations it has meant an extended period with no new products being available for review. Here the first to emerge an Intel i5 2450m bearing the Acer Aspire V3 571 name. 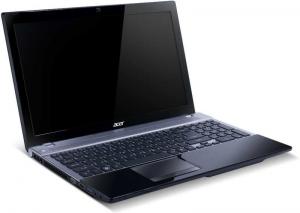 The left side has DC input, Ethernet port, VGA out, HDMI out, USB3 port and external headphone and microphone connections. The front edge has SD card port and a line of four pin hole LED’s. The right side has two USB2 ports a DVD multi drive and a Kensington Lock connection. The rear is clear as the screen moves over it.

Normally most notebooks come with a McAfee Anti Virus trial and Norton backup trial. The latter was on it but the former was missing, I am assuming a previous reviewer had placed AVG Free on it to give protection. There were also some other programs that I do not think would have put there by Acer so I will only state what the Acer website says is there.

Windows Home Premium 64bit. Microsoft Office Starter (Word and Excel with adverts). Bing Bar and Windows Live Essentials. I am sure there are some other Acer apps but I was unable to get a list so I will mention none.

The core i5 Intel processor is dual core and has a base speed of 2.5GHz which can with Turbo boost perform at up to 3.1GHz. The hard disc is stated at 500GB but the ‘C’ Drive reads 448GB, this to me seems a little small given the size of most software today.

You of course have Gigabit Ethernet, the Wi-Fi is a, g and n. There is also Bluetooth V4 and it comes with 6GB RAM.

The battery life is stated at 4.5hours and here I struggled with what they claim. The best I got with a range of uses was just three hours but I could have possibly got more in light use, I do not have an algorithm as to how they calculate things. One hour of heavy use compiling video took 35% of battery. One hour of iPlayer took 35%. One hour of Internet browsing also took 35%. The only other use was simple desktop word processing which took 25%.

It’s a nice unit – pity about the shiny black – it seems very responsive and the video compression ran very swiftly. However the battery use seemed very heavy to me when the specifications say 4.5 hours that’s what I expect. A full recharge (while off) took 90minutes.

As with most notebooks the screen is reflective which can mean it’s difficult to read with a strong light behind you.

While testing the recently reviewed AOC unit I connected this and used it as both the main and an extended display without problems.

After 6 years, I'm still very happy with my Aspire V3-571. It's never caused me any hassles and is still going strong. It's been great for every day stuff, browsing the internet, listening to music, watching videos. I'm loathe to replace it because it means having to find and reinstall all the software I've installed on it over the years so i'm hoping this has some life left in it yet.
Rating:

cer went ahead and released its Aspire V5 series back in March. But it doesnt mean that the company wont increase its line up and increase the titles in its ranges. And indeed it just trotted out two Ivy Bridge Aspire V5 notebooks.
http://www.newsflaps.com/2012/06/07/acer-aspire-v5-notebooks-refresh-ivy-bridge-sale-630/