Two more items from those clever USB people in Hong Kong. The first a Star Trek type webcam that allows you to fix the position unlike those built into the screen. Second a device to tell you when you have received email. 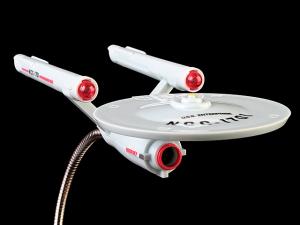 This could not be easier to install, remove from the box, bend the flexible cable to the position you require and plug it in to a USB port. Windows installs the driver and then just open whatever application you want to use it with.

It is 13x7.5x4cm with the flexible lead coming from the back of the body this is 35cm long and is flexible around one third of the distance along the length is a solid fin (5x3x1cm) and this has a sticky pad on its base for semi permanent fixing. However the lead is strong enough to stay rigid even if the lead is just supported by the USB socket.

When power is on the two engines above the main body glow red, the webcam (below the body) gives the image into whatever application you use. Should you wish this can be used for Skype - or other – such video conversations.

It is stated to work on Windows XP (SP3), Vista or 7 as well as MAC OS X 10.5. I have only tested it on the former but it worked out of the box on that with just a slight pause to install drivers and no reboot was required.

I suspect that the main market will be children or maybe older people who remember the Star Trek movies or TV series.

Available from the link below for $30 US plus a standard delivery charge of $3 (US) whatever the size of the order.

I am not totally convinced by this product. If you are the only person using your PC then it might be of use but I see security implications in a shared environment as you need to enter passwords into the product for it to function fully.

As with most Brando products it has dual uses. Apart from the ability to check for new emails across multiple accounts, Gmail, Yahoo, Outlook, Outlook Express and most Pop3 accounts it has another less contentious job.

As a Webmail Notifier it has a 6x3.5x2cm envelope in the lead that can glow one of four colours when mail is available to be read, it can even be setup to omit a sound when mail comes from a specific account.

The second use (for which I am a lot happier) is the ability to be a four port USB hub and this great where front ports on a desktop or tower system are not available or accessible. It is a 1.5metre USB lead with the Webmail envelope being 15cm from the end away from the PC and after that it splits into four USB leads splaying to a maximum of 20cm from the box so almost any items however bulky can be multiply connected with it.

For its second use it is great meaning it can be connected from the rear of a tower system where to normally connect a USB lead is likely to put your back out and can then mean USB items can be connected or removed without any problem. As stated I have misgivings about its use as a Webmail Notifier but maybe years of suspicion have made me paranoid about never leaving passwords lying around unless you are certain you are the only one who ever goes near the PC, an to be certain of that you would need to live entirely alone.