Fashion has reached even the most mundane of computer peripherals with Toshiba, amongst others launching a fashionable range of external hard disks to either transport or simply back-up your data. Interesting for a fashionable product - there doesn't seem to be a product name - it's just a "Toshiba External Hard Drive" 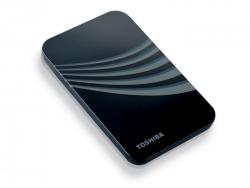 With fashion in mind Toshiba are shipping their drive in four sizes, with each getting a distinctive dash of colour, that also denotes the size : Gecko Green/160GB; Hot Rod Red/250GB; Carbon Grey/320GB; and the latest member of the family - Electric Blue & Black/400GB. My test unit is the 320GB grey version. As well as the colour you have a shiny black case measuring approximately 16x 81 x 127mm (DxWxH) and weighing a very slight 155g.

The whole device is shipped in a hermetically sealed plastic container along with a short 25cm USB cable and a set of quick start guides in 8 different languages. The actual instructions are limited to attaching the device to your computer. The drive should work with PCs running Windows 2000, XP or Vista and with Apple Macs running Mac OS X 10.3.9 or later. All my testing here has been done on a high-spec Windows Vista machine.

The only external interfaces are a standard USB 2.0 connector and a blue LED that shows disk activity.

Technical information from Toshiba for this product is somewhat scant. The datasheet specifies that the drive includes an 8Mbyte cache and... well apart from the capacity that's it really. There's nothing on performance of the 2.5" drive itself. Out of the box it's compatible with both the Mac and with Microsoft's operating systems. The default formatting of the drive uses the now venerable FAT32 format. If you want to store files over 4G bytes on the drive then it's a simple task to reformat with NTFS.

The theoretical maximum transfer rate on a USB 2 interface is around 60M bytes/second. As with previous hard disks I've reviewed I've done a couple of performance tests of my own, which are summarised in the table on the left. These figures were taken from a high performance desktop system on a dedicated USB port (no hub). I retried the tests having formatted the disk as NTFS with almost identical results.

This isn't particularly stunning performance but this isn't particularly a problem for those that just want to move data from A to B, or those that will be slowly building up a duplicate of their multimedia files as they get them. It will be slow copying large volumes of data to the drive though - 300G bytes of data for example is going to take around 7 hours. Make sure you start your copy early!

While not out to win any world records for performance the Toshiba drive is very light weight and will easily slip into a bag or pocket (try not to fill it with government secret document beforehand though!).

Prices from Amazon are :

I haven't found a price for the just released Electric Blue & Black/400GB drive.

These prices compare favourably with other similar devices.