Is it a notebook docking station? Or is it a keyboard? In this case it is the Logitech Alto Cordless product which combines both features. 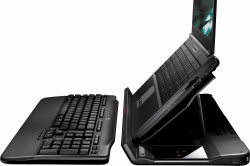 I have a theory that somewhere in the world, residing in a darken room, is somebody who has been set the task of dreaming up names for new products within the sphere of computing.  One of the latest offering to emerge from this room is that of Alto Cordless which brings together a notebook docking station and a wireless keyboard.

Developed by Logitech, the Alto Cordless adopts a predominately black covering for both of its main elements.  The docking station is sturdy enough to handle the greater majority of notebooks up to 15.4 inches with the possible exception of those with front-mounted inputs sockets and optical drives (see later).  The docking station unfolds to allow the notebook to be positioned at an angle of up 45 degrees.  A raised lip on the front of the docking station ensures that the notebook will not slip while small rubber pads on the base of the device perform the same task for the station itself.  This lip does have the disadvantage of blocking access to any front-mounted sockets or optical drives found on the laptop.

A permanently attached link is provided to connect the station to the notebook via USB and thus gives the user access to the built-in three USB 2.0 ports located on the docking station.  Actually you only get two extra ports as you use up one of your original quota when making the connection.  For power hungry USB devices you will need to use the supplied mains power lead rather than rely on the notebook to provide the necessary power.  Tucked away at the rear of the docking station are channels to help organise any connecting leads and keep them under control.  The weight of the docking station, approximately 4.5 lb., means it is better suited to a desk or office environment when it does not need to be lugged about.

As well as the docking station, this kit contains a wireless keyboard.  With a rubberised palm rest, this keyboard features the standard QWERTY layout with the usual collection of additional keys for handling various media and application tasks such as Internet and e-mail.  The wireless connection between the keyboard and docking station was particularly impressive as there was no problem with communication at distances up to 15 metres with the two elements located in different rooms - apart, of course, from not being able to see the screen.  Working at distance also revealed a problem with regards to the Caps and Num lock features.  Lights indicating when these features were turned on are present but located on the docking station rather than the more convenient location of the keyboard.

Powered by two AAA batteries, the keyboard is light enough to be positioned on your knee when working.  The keys are reasonably responsive with a muted click to indicate when pressure has been applied while the rubberised palm rest adds a degree of comfort.

However there is one major criticism of the product.  I keep asking myself why, when you are given the freedom to work away from the notebook with a wireless keyboard, no wireless mouse is included to make a complete solution and help justify the price point of £84.99 being quoted by Logitech for this product.

I love this product had 1 for 2 years and the ac warped after all this time, looking for a new 1