This is a cordless keyboard and mouse set from Logitech, however it contains a number of extras within the box.

This is described as the 'World's First Smart Desktop', well it is still a mouse and a keyboard but the mouse is not only cordless but it can sit in it's charging dock so it never needs to run out of power. The keyboard is much more than the standard 105 key offering.

There is a double sided Getting Started sheet and this together with a yellow sheet of paper telling you that you must update the supplied SetPoint software during installation for everything to work will mean you need Internet connectivity.

Just like the mouse the keyboard is wireless, it is only slightly longer than a standard keyboard but it is more oval than rectangular so it is wider. The maximum dimensions are 43.5x21.5x3cm the height can be raised by another centimetre with the back tilts employed.

The keyboard has 89 standard full size keys with the only real changes being that the numeric keys are exactly that so no duplicate page up, page down and delete keys on the numeric keyboard. There are 19 smaller keys above the keyboard and these are the function keys and some programmable ones, these keys also work with the 'mode' button and their jobs are shown in grey on the keys. You are not finised yet as there are eight other buttons around the top of the oval four for Internet use and the other four for digital media use. In the top centre of the oval is a 7.5x2cm LCD display with four control buttons on it's lower edge. Nor are the features finished yet as the left side of the keyboard has four media touch buttons are two touch sensitive scroll ramps for volume and size. 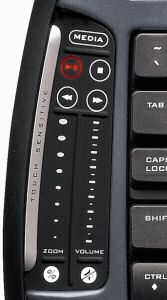 In theory it is easy but I needed to run though it twice and then on the next reboot (switch on) once more before it was happy but since then it has performed well without any problems.

Now a bit about the mouse it is matt black and silver grey in colour and far from just a scroll mouse. The normal left and right mouse buttons are touch sensitive areas while the wheel in the middle is four directional. The left side has a forward and backwards button either side of another programmable button. Just on the top edge beyond this is an LED to let you know the charge state of this laser optical rodent.

Giving the mouse dimensions is not easy as it is waisted but the maximum figures are 13x7x3cm and it is somewhat heavier than a standard mouse at around 180grams.

Certainly a set that does it all and once you have delved into the SetPoint software there are even more choices, however for some reason best known to itself it stubbornly refuses to make the tea.

Doing my Internet searches found the Logitech MX5000 desktop set at a best price of £80.69 from the link below. Given that the 'suggested' selling price is £119.99 that's a good value purchase.