A small unit that can be left to record movement and also record sound. It sounds like a James Bond type device. Well now it is available at a price that can tell you who came to your door while you were out or even while you slept. 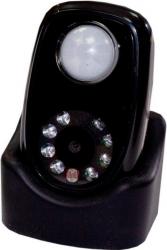 The CATs-i Mini Video Recorder measures 7.5x4x3cm and weights less than 50grams. It can be placed somewhere in a sort of rubberised chair and its position adjusted for the best angle. Alternately there is a tripod screw in the rear of the unit to help correct placement.

The instructions I saw were on an A3 sheet of paper and needed a little refining which I am told has taken place. It comes with a wall plug USB charger in the box but can also be charged via USB.

While I mentioned ‘James Bond’ this is hardly a secret device as an LED will flash while recording. The instructions go through how to set up the device and it is important to follow these or all images will be dated 2008.

You can set resolution to VGA or QVGA. The frame rate choices are 10FPS, 15FPS or 30FPS. The record time after movement is detected is one of 30seconds, 60seconds or 180seconds. Once these selections have been made you then set the all important time and date. You can also add a description to show where images were taken.

It comes with a 4GB micro SD card which is inserted under the supplied solid battery that is charged by USB lead.

This lead is also used to enable viewing of images on your PC. The sensor is infrared so light is not the highest priority. Motion can be detected up to 6metres away and the sensor mounted above the camera has an angle of 70degrees. The microphone was – to my mind – too sensitive and unadjustable so turn your speakers right down when you replay captured images. The microphone is meant to have a range of up to 10metres.

The solid battery is stated to work up to ten days in standby and is good for up to two hours of recording between charges. As stated it comes with a 4GB micro SD card but it can should you wish take up to a 16GB one.

Unlike some other motion sensor devices I have tested this one is not waterproof so not suitable for outside use.

In some of my tests I mounted it in the corner of my porch. This is a task that requires adjustment to get the right angle and you have no way of knowing this as it needs to be taken down to attach to the PC to see exactly what is in range. You then need to adjust to get exactly the right angle relying on your memory and judgement.

Even in good daylight the colour of images looked somewhat washed out but faces were clearly there to be identified. This is not a high end device but can be useful inside if someone is not meant to go into say your office while baby sitting so you know they are not concentrating on the job at hand.

This would never stop a professional but yobs and amateurs may well find their collars felt as a result of this device.

The stated price is £99 including VAT and can be seen on the following link: