Velodyne, the California based design and development company specialising in audio equipment and responsible for the vFree headset reviewed recently, has a second headset model entitled the vQuiet. Manufactured in China, this new headset offers over-the-ear noise cancelling functionality as you listen to your favourite music in solitude but only if you really want to (see later). 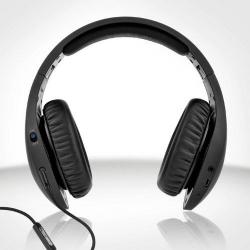 Designed by international artist Marta Hall (who I have to admit was completely unknown to me prior to the arrival of this product), who created the signature style and shape of the headset, the vQuiet is predominately matte black in colour apart from the metallic light blue logos on each ear-pad.  When not in use, this headset can be folded up and stored in the soft carry-pouch provided in the box.  You also get a cord-style 123cm audio lead with “L” shaped 3.5mm jack plugs at each end and an inline control pad plus a standard to micro USB 105cm lead for charging the unit’s internal battery used for the noise cancelling feature.

A 5 x 1 inch padded strip on the inside of the headband helps ensure a comfortable fit when wearing this headset.  Each end of the headband can be expanded by as much as 35mm and the well-padded ear-pads have enough play, with regards to their positioning, to sit comfortably on various head sizes and shapes.  I personally found this headset to be very comfortable.

The left ear-pad has a connection socket for linking to an audio source device via the supplied lead.  As the control pad is much closer to one end of the lead that the other, you do have the choice of which way round the lead is attached to the headset and music source.  I preferred have the control pad nearer the music source as I could see what I was doing, otherwise I would be working blind as I selected the volume up and down mini-buttons or the pause/restart option.

Not surprisingly, but disappointingly to my mind, the control feature on the supplied audio lead only works when linked to an Apple device.  When an MP3 player or Android device is used, you will need to use the controls on the source device to make adjustments to the volume and pause the music.  It is about time that developers got to grips with the fact that non-Apple users need to be catered for.  This is not a criticism of just Velodyne but applies to all headset manufacturers.

The left ear-pad also has a slider button for turning on/off the noise cancelling feature.  When this feature is turned on the button will glow blue.  While you may not be able to see this visual effect, other will and they might get the message you do not want to be disturbed.  The Velodyne logo on the left ear-pad can be used to temporally disable the noise cancelling feature if you want to allow extraneous noise to reach your ears.

The right ear-pad house the micro USB connection for charging the device plus a second 3.5mm connection socket.  Why, you may ask, would you need a second audio connection socket unless you enjoy listening to two different streams of music?  Actually with this vQuiet headset, this second connection becomes an audio output port enabling you to daisy chain another headset for a second listener.  The second set does not need to be a Velodyne headset but the second listener will not get the benefits of the noise cancelling features.

Before using this headset, you will need to charge its internal battery.  This process can take around 1.5 hours and a red light on the right ear-pad will glow and then turn itself off when charging is complete.  You should get up to 35 hours of active noise cancelling from a full charge.

A noise cancelling headset attempts to distinguish between the audio you want to listen to and other noise.  It then tries to remove the unwanted noise.  One possible way, which I often use, to test a headset’s ability to achieve this is to wear the headset while listening to music from an outside source and then switching on the noise cancelling feature.  The main music should still reach your covered ears while any other sounds should be removed.

Overall I was impressed with the audio quality delivered by this headset’s 40mm driver with a frequency response of 20 HZ – 20 kHz.  The noise cancelling feature worked well.  I just wish the control pad on the audio lead worked with my various Android devices.  This headset is currently being priced at £130.