These are designed for Gamers as their life  or lives  may depend on hearing tiny sounds that most sets of headphones cannot pick up. The result is something that some may think is overkill others may rejoice that they are not killed. 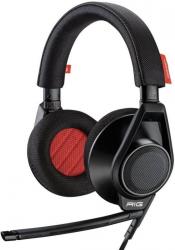 The headset itself is comfortable; any gaming headset has to be as it is often worn for many hours at a time. The earpieces are coated in a breathable material and for any folically challenged person the headband is well padded.

The Quick Start Guide is eight sides of heavy card, unfortunately it is multi language and what it says would surely be said better in a single page per language.

There are two models but the only difference is colour, either white or black.

While they are designed for gamers you can still do more mundane things while connected like take phone calls, have a conversation or even listen to music but all these distractions can be blotted out to allow you concentrate on the gaming.

Perhaps the most essential part is called the RIG Mixer, it is 3.5cm tall, 8.5cm wide and 11cm deep, the last figure allows for routing of its hard wired cables. The central 4.5cm disc is a simple rocker control, left for phone right for game. There are three touch buttons around the perimeter, phone, mute, controls. There are separate volume controls on the inside of the unit just outside the rocker control for volume to control phone and volume for game. There is another control on the outside which has fine movements.

A thick 3metere long USB and 3.5mm jack emerge from the back of the RIG Mixer which means the connection to the PC can be some way from the playing point without having to stretch leads.

There is a boom microphone that can be fitted to the base of the left ear fitment and the 1.5metre long lead is of the flat type so far less likely to get twisted. However there is also an inbuilt stealth microphone.

The RIG Mixer decides how much punishment you give your ears, the built in equalizer has three settings Pure, Intensity and Seismic. My tests were limited mainly to the first of those. A 40mm speaker driver gives not only a lot of sound but good sound clarity and for gamers clarity is what they live or die by. Other facts the speaker frequency is 20Hz-20kHz and the microphone is 100Hz-10kHz.

While other headsets allow you to take calls or even chat online while listening to music the RIG has the mixer to determine at what level – if at all – these are allowed to destroy the concentration.

The unit is Skype compatible and in case you thought the RIG mixer needs batteries it does not it takes power from the USB lead.

The headset was comfortable even when worn for hours and I assume the other range of leads provided are for the other things like X-Box 360 and PS-3. The Quick Start Guide does not specify this and at the time of writing the Plantronics Website is not that helpful.

The Plantronics RIG is available from the link below for £74.94 with free delivery.