As part of its Hidden Mystery Collectives series, Focus Multimedia has bundled together a couple of Echoes of the Past titles. Belonging to the Hidden Object Adventure genre, these titles are entitled The Citadels of Time and The Revenge of the Witch. 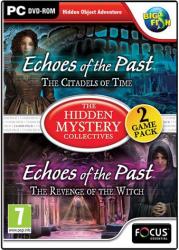 In fairly standard fashion, The Citadels of Time allows you to adjust the volume levels of both the background music and sound effects which does include the spoken dialogue that occurs during the various cut-scenes linking together the various parts of the story line.  There are also options to play the game in full screen, wide screen and using a custom cursor.  Two modes of game play are available.  You can opt for Regular mode which gives you additional hints and sparkles to indicate active areas or play in Advanced mode without the helpful sparkles.  In either mode you will not be penalised for indulging in bouts of indiscriminate mouse clicking.

The opening video sequence in The Citadels of Time sets the groundwork for this game as an evil witch turns back time and then scatters important elements relating to timepieces in different locations and eras.  It is up to you to visit these eras and locations by making use of time portals that appear as you search for these elements.  Only by finding the missing elements and restoring various clocks to their original condition can you free trapped souls and thwart the plans of the witch to take control of the Kingdom of Orion.

The well drawn scenes that comprise your full-screen views when in Adventure mode are overlaid with the usual collection of player’s aids.  Access to the main menu and a magic book, which automatically records your progress and discoveries, can be located in the top left corner while the rechargeable Hint feature, in the form of a mirror, is in the top right corner.  This same corner also holds a Strategy Guide button but this facility is only available in the Collector’s Edition version of the game and this bundled copy does not qualify.  A hidden Inventory, usually concealed until touched by the mouse cursor, runs along the top of the screen.  Arrows at either end of the Inventory allow you to cycle through the content that can quickly build up during this game.

As your mouse cursor moves around the various scenes it will change shape to indicate when certain actions are possible.  Navigation arrows point towards possible directions while a magnifying glass encourages you to examine an object.  When a pointing finger appears you can interact with an item and pick it up when you are shown a grasping hand.

Two types of Hidden Object game play are featured in this game.  You can either search for the items in a list with those coloured red requiring an additional action or replace items in a scene.  With the former you will need to locate an extra item once all the listed ones have been located.  With the second type you do not need to be too precise when placing items and you will be rewarded with an item once everything is in place.

From time to time you will need to solve a puzzle in order to make progress.  These puzzles are varied in type and difficulty level.  A Skip button becomes available after a short delay for those puzzles you find too difficult.  The completion of a puzzle brings a reward in the shape of an item required later or opens up access to another area.

The Revenge of the Witch is again based in the Kingdom of Orion as this evil creature sets out to take her revenge.  This game offers a couple of extra options available from the main title screen.  There is a button for the Strategy Guide.  This is merely a link to the Big Fish Games website where you can purchase the Strategy Guide if you wish.  The second difference involves the game mode with three levels of difficulty being available.  As well as the Regular and Advanced modes, you can now select the Expert mode which does not allow you to skip the puzzles or mini-games.

With The Revenge of the Witch, a spell has been cast on the whole of the Kingdom of Orion.  This spell has even imprisoned a powerful magician although his spirit remains free to wander around and ask you for assistance in defeating the witch by removing the curse.  He gives you his magic staff and asks you to find its missing ten gems that have been scattered around various locations.

As with the earlier Echoes of the Past title, your full screen view of the various scenes when in Adventure mode places the available tools at the top of the screen.  The game menu and book recording your progress are situated in the top left corner with the Hint mirror in the top right corner.  Running across the top central area is the Inventory which remains hidden until touched by the mouse cursor.

The usual collection of mouse cursors are used to identify when you can move in a particular direction plus examine, interact with or pick up an object.  Three varieties of Hidden Object game play make an appearance in this game.  Along with the two types featured in the first title, The Revenge of the Witch also presents you with the challenge of searching through a scene by moving around items in order to find pieces that you need to complete a task such as repairing a ladder or creating an emblem.

There is a mixture of puzzle types appearing throughout the game.  Generally I found these puzzles to be more difficult that those in The Citadels of Time.  A Skip button will appear after a short delay (but not in Expert mode) that can be used if a puzzle proves too difficult.

Both games fit together well with well drawn graphics, atmospheric sound effects and spoken dialogue during cut-scenes.  One slight disappointment was the lack of any lip movement with those delivering the dialogue.  While there is more content in The Revenge of the Witch, I prefer playing The Citadels of Time.  Priced at £10.20, this bundle pack requires 1.0GHz processor, 1280MB of RAM and 933MB of hard disk space running Windows XP and later.