As it approaches its one hundred year anniversary, John Buchans classic tale of murder and spies makes its appearance on the Windows PC platform. 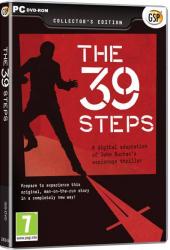 First published in 1915, John Buchan’s classic adventure spy novel, entitled The 39 Steps, has appeared in a variety of guises including print, of course, cinema, theatre and television.  Now a further format is added as this tale of skulduggery and a German invasion plot makes the transition to the PC platform.  Classified as a digital adaptation, the PC version of The 39 Steps is available on Avanquest’s GSP label.

Before going any further I should make clear that despite being released under the GSP banner which is predominately game-based, this title is no such animal.  The PC version of The 39 Steps is not a game.  Instead it is a kind of interactive novel where you follow the plot line set out by the author with an occasional opportunity to explore some scenes and make various gestures of the polite kind.

Firing up the program brings up a dialogue box that requires you to set the screen resolution, graphics quality plus the primary and secondary input controls used to navigate this title.  This dialogue appears every time you start the program and quickly becomes annoying. I could find no way to avoid or turn off this feature.  There is also a long opening sequence of credits and cast list.  Fortunately you can cut this short by pressing the Enter key.

Up to three different profiles can be set up when working your way through this digital adaptation of The 39 Steps.  You can opt to use the original text with or without dialect and subtitles or with Gaelic text.  The profile page, which appears whenever you open this program and as part of the closing routine, shows the current progress time plus the number of events completed and the number of cards (showing characters and objects from the story) and awards gathered.  You can check back and view these items at any time.

The story is played out over various backdrops that give you a good feel for the period and the locations where Richard Hannay spends time avoiding capture by the police, for a murder he did not commit, or the conspirators who are intent on silencing him because of what he might know.  For most of the time your involvement in this story consists of little more than wiggling the mouse in a certain direction or clicking the left mouse button.  I tended to use the latter method of moving through the chunks of narrative text.

Neither action is required when conversations are taking place.  These dialogue sequences, delivery by professional actors, tend to flow in a natural manner with short breaks as you get with normal conversations.  With this story sticking with Buchan’s original text, the dialogue will appear rather strange to modern day ears.  It is old-fashioned and often appears out-of-place when delivered by some of the characters in some of the scenes.

If, like me, your only previous experience of Buchan’s tale of The 39 Steps is the one portrayed by cinematic or television versions then you might be surprised to discover some of the liberties taken by the screen writers in order to appeal to more modern day audiences.  Remember this tale of intrigue and espionage is nearly a hundred years old and is based on a period when women were reduced to playing minor roles.

In this original version of The 39 Steps the only roles available to women were as house maids or old women who provide shelter to the story’s hero.  As a result there are no handcuffs, stocking legs, leaps from windows or a music hall performer in this original version.  However you do get a political meeting plus a capture by and an escape from the conspirators.

At various points during the story you can search scenes for information or click on a topic headings for information.  Labelled pointers appear from time-to-time directing you towards the next section of the story.  Earlier I mentioned gestures and these are required to carry out tasks such as opening a door, using a telephone or setting off an explosion.  You will need to duplicate basic on-screen symbols using the mouse cursor.

This version of The 39 Steps is an interesting experiment but not one that you are going to want to go through more than once.  The graphics are reasonable while the voice acting does help add interest to the story.  Priced at £7.99, The 39 Steps requires a 2.0GHz processor with 1.0 GB of RAM and 1.7GB of hard disk space running Windows XP and later.