A missing sister, secret sect, hidden objects and puzzles come together in a Collectors Edition game from Focus Multimedia. 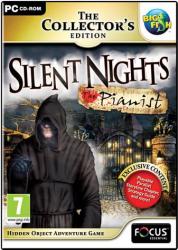 Silent Nights: The Pianist is a Hidden Object Adventure game originally published by Big Fish Games.  The game is now available from Focus Multimedia in Collector’s Edition format.  In common with other Collection’s Edition titles, Silent Nights: The Pianist adds a number of extra features to the main game, wallpaper, concept art and music only become available when the main game has been completed but you can access the supplied Strategy Guide anytime that you feel the need of help in how best to make progress,

Various options can be adjusted from the game’s opening screen.  You can play the game in full screen mode with a custom cursor, widescreen correction and an extra brightness option plus the ability to adjust the volume level for both sound effects and background music.  The game can be played in Casual or Challenge mode with the former providing more helpful sparkles and a faster Hint and Skip recharge when it is used.

The game’s opening introductory sequence places you in France during December 1946 as you drive to the village station to meet your sister Yvette.  You almost run down a sinister hooded figure but manage to stop just in time.  On arriving at the village you can opt to play with a tutorial that explains about the various types of cursor and some of the game’s other features.  Different cursors appear to indicate when you can examine, interact, grab, move to another location and gain more information.  When this information is imparted by another character, the dialogue is spoken and shown as printed text.

Your full screen view in Adventure mode features an inventory bar running across the bottom of the scene.  This will contain the various items you find during your explorations and the rewards you receive for completing the Hidden Object sessions.  On the right of the inventory, in the form of a speedometer, is the Hint feature while the left side of the inventory holds the game’s menu option and the Strategy Guide.

The Hint feature can prove useful in both Adventure and Hidden Object mode.  In Adventure mode it can suggest an area to examine or a direction in which you can move to a different location.  In the case of the latter, the Hint feature will not need to recharge before it can be used again.

Hidden Object mode presents you with a list of items which you need to locate within the scene.  While most of the items in the list will be coloured black, one will be displayed in red indicating that certain tasks will need to be carried out before the item can be selected.  For example you may need to inflate a ball before it can be selected or you may need to repair a vase, cut the flowers and then place them in the vase before you can pick up the rose vase.

When in Hidden Object mode you have the ability to use the Hint feature in two different ways.  There is the more standard method of clicking on the Hint feature and letting it select a yet to be located item which will then be highlighted.  Or, if you prefer, you can click on one of the items in the list and have it highlighted in the scene.  Whichever method you choose, the recharging process will take the same amount of time.

From time to time you will need to solve puzzles.  Limited instructions are provided and there is a Skip option which will become available after a short period of time.  Generally the puzzles will reveal the locations of an object that you will require later in the game.

Along with the puzzles, there are also a number of linking sequences as you make your way through the nine chapters that make up this game as to try to rescue your sister from the clutches of a secret sect.  These sequences involve characters whose only moving parts appear to be their lips as they deliver their spoken dialogue.  You need to click through each portion of the dialogue which can be a little tiresome.

As you might presume from the Extra Brightness option, some of the scenes in this game can be a little dingy with flickering lights.  It was also noticeable that there were occasional delays towards the end of the game when scene changes were required.  Silent Nights: The Pianist is a reasonable game but a little light on content.  The game requires a 2.0GHz  processor with 512MB of RAM and 450MB of hard disk space running Windows XP and later.  The game is priced at £10.20.