A Fish to the Rescue

A recent arrival from Mumbo Jumbo reminded me of a game I played many years ago on a computer system that was long assigned to the scrapheap of failed brands. While I have forgotten the games title, I do remember that it involved guiding a submarine through a series of underwater caverns avoiding land mines, depth charges and laser beams while destroying enemy vessels. 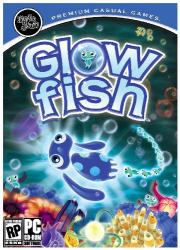 With the Mumbo Jumbo title of Glowfish, you take control of an aquatic hero as you embark on an underwater adventure.  An introductory sequence with colourful graphics and layered scenery leads you through a story of how an underwater paradise was turned into a dangerous environment with enemies lurking in every nook and cranny, behind rocks and plants plus waiting to pounce of our unwary hero as he swims through passageways.

This state of affairs has been brought about by the machinations of the evil Dr. Urchin.  Feeling unloved and friendless, Dr, Urchin sent out his minions to bring him as many friends as they can capture so that he can put them to work for him.  Included in those taken prisoner is Coralline who is the girlfriend of Glowfish.  It will be your task to guide Glowfish as he swims to the rescue to free Coralline and the others from Dr. Urchin’s clutches.

When controlling Glowfish you have the choice of methods.  You can opt to use the keyboard, a mouse or gamepad.  With your chosen method of control you can manipulate Glowfish through a full 360 degrees as you travel in any direction in search of captured friends and his beloved Coralline.  An orbit mode allows you to surround Glowfish with friends while sometimes a speed boost can get you out of a difficult situation.  Other controls include a zoom feature and the ability to toggle on or off a map view to locate possible routes of passage or escape.

Spread over 50 levels made up of different stages, this game contains some great colourful underwater scenery with constant movement from the plant life, various fish that tend to remain in the background plus Glowfish and his enemies.  You need to seek out lost friends by swimming around.  Speed is not a consideration, in fact moving slowly and taking your time in far more advantageous as your enemies can suddenly appear at any time.

So less speed more haste should be your mantra although there are instances when a sudden burst of speed will be required.  You need to seek out your lost friends, who have the appearance of tadpoles and eyes encased in triangular translucent material.  Coins dotted around the different scenes will need to be collected.  These coins allow you to upgrade some of your special friends that join you in your work.

Generally you do not need to go looking for Dr. Urchin’s henchmen as they seem to be drawn towards you like bees to pollen or, more appropriately, like fish to the bait.  These voracious sea creatures can hunt in packs and are far bigger than you or any of your friends.  However you do have a tactic against which the enemies’ only defence is their weight of numbers.  You simply need to swim around them while avoiding contact with the enemy.  Shots will be automatically fired at the encircled enemy – a bit like the cowboy and Indian fights of old westerns with you taking on the role of the attacking Indians.

Not all the dangers that you face will be initially visible.  Some creatures have the chameleon-like ability to blend into the background.  The only clue that you have as to their presence is the white of their eyes.  Venture too close to them and you could end up on the dinner menu or have an attachment on your nose that you will need to shake off before it drains your energy.  You will also need to work out how to get passed snapping jaws that block your path.

Glowfish has some super chums that need to be released.  In total there are eight of these chums.  These fishy characters can be selected to accompany Glowfish on his journey as he rescues all the captured friends in an particular area and then lead them to the freedom point before moving on to the next leg of his travels.

Glowfish is the type of game that I tend to play in short bursts rather than long sessions.  It can be frustrating but also has the ability to give you a great feeling when you complete a particularly tricky passage.  Requiring a 2.0GHz processor, 1GB of RAM, 200MB of hard disk space with support for DirectX 9 running Windows XP and later, Glowfish has been priced at $19.99.  I am led to believe that there is a tablet version of this enjoyable game.