When you need a good hotpot recipe, the location of Coronation Street, theUKs longest running Soap, would seem to be just to place to visit. This was obviously the theory behind the developers ofCoronation Street: The Mystery of the Missing Hotpot Recipe.

Coronation Street
The Mystery of the Missing Hotpot Recipe 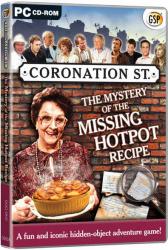 Described as a Hidden Object Adventure game,Coronation Street: The Mystery of the Missing Hotpot Recipe is available from Avanquest.  Actually the missing recipe, used by Betty to create her mouth-watering, popular hotpot, had been torn into pieces prior to destroying it before it could fall into the wrong hands.  However, before the destruction can take place, a gust of wind scatters the pieces all over the place.  It is your task to track down the missing pieces by searching different locations featured in the Soap.

As usual with games of this type you can create your individual profile by entering your name.  You can then select the play the game or opt for Freeplay mode which allows you to revisit scenes you have already completed.  Initially Freeplay mode will be empty but it does fill up quickly as you pay calls to such locations as the Rover Return, The Kabin, Garage, Roys Rolls, Hair Salon, Grimshaws, Barlows, Corner Shop and Underworld to mention just some.

Each scene consists of a photographic view of the particular location with an appropriate character superimposed on it.  Sometimes the character’s pose looks a little awkward making it appear as if they were not part of the original scene.  As well as the characters, a number of items will have been superimposed on the background scene for you to locate.  In some cases you will need to find a single item which is then followed up by set numbers of other items but generally you will be given a list of specific items to find.

This list of items will be displayed across the bottom of the screen.  For some reason, the game’s developers have chosen to use an extremely blocky font which can cause difficulties when trying to decipher the actual name of some items.  As an example this fonts makes it difficult to differentiate between “book” and “hook”.

While some of the listed items are in plain sight or partially obscured by other items, many of the items have had their transparency level adjusted.  This technique has been used in some other games but not to the degree it is with the Hotpot mystery.  I definitely felt the use of transparency adjustment had been over done and spoil my enjoyment of the game.  At times I felt as if I needed Superman’s X-ray vision in order to locate some items.  Occasionally by noticing a slight fuzziness in the scene was the clue that enabled me to locate an item.

As a result the Hint feature tended to be used more than normal.  By clicking on this rechargeable feature, all the colour would be drained from a scene apart from a small patch of yellow which would identify an object yet to be found.  TheCoronation Streettheme music would also be played.  After a short period, colour would be returned to the scene and the Hint feature would start recharging as it filled up with the colour yellow.  Meanwhile appropriate sound effects could be heard in the background.

Some of the scenes will contain one of the missing pieces of the recipe which need to be found after all the other items have been located.  These recipe pieces are just various white shapes, sometimes very transparent, with no sign of any writing on the paper.  The Hint feature can be used to help when looking for the recipe pieces.

Linking each of the visits are cut-scenes.  In each case the cut-scene consists of a conversation conducted in print only between still photos of characters in the Soap.  The conversations are of little relevance to the storyline.  While I could find no way of speeding up each section of dialogue, you do have the option of skipping the whole sequence.

From time to time you will be faced by a mini game which arrives with no instructions, leaving you to work out what is required.  Fortunately these mini games are not very challenging and will not hold you up too long.

Coronation Street: The Mystery of the Missing Hotpot Recipe will only really appeal to committed fans of the Soap.  It was not a game that I enjoyed playing and I can not recommend it.  Priced at £10.20, the game requires a 1GHz processor, 1GB RAM and 250MB of hard disk space running Windows XP and later.