Septembers nearly over and the prime buying time  to avoid disappointment  from the younger ones is just starting. This time items made of wood, first a game that has been around since before I was a child Chinese Checkers and second a game new to me Shut The Box. 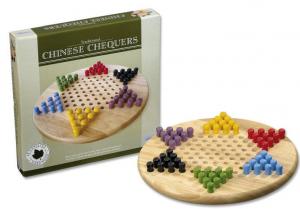 Things made of wood are so much more permanent than things made of plastic, not just from the strength point of view. So a lovely light wood board, the pieces themselves are also made of wood in six shades, black, blue, green, red violet and yellow.

For anyone who does not know the game the object is to get your ten pegs into the area opposite the starting area. It is a game for any number from to six players, it works well for any combination something you are not able to say for a lot of games.

In all the board has 59 holes + 60 holes in the various home bases, it looks simple but of course your opponent will have a say as until his pieces are out you cannot move your pieces in as you need empty spaces.

The board is circular at 29cm and in a light wood, the pegs fit nicely into the holes with around .8cm going into the hole leaving around twice that out of the hole to enable easy picking up to make movement easy to do.

There is a single A4 sheet of rules that makes this game easy enough for younger children to play but it can of course be very technical when played by adults. With several mixed ages playing it works well as they will almost certainly have different tactics in the way they play the game. The age rating given on the box is ‘7+’.

Traditional Chinese Checkers from Gibsons should be available from good toy shops or of course online I found it at the link below for £9.99 with free delivery. 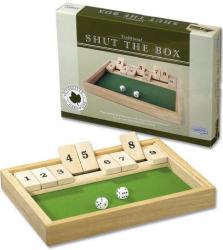 This game comes in more than one size. Here it is a wooden box 27.5x19.5x3.5cm. The wood is a light colour and is made from Re-Forested Hardwood.

This is a game I have never played it has numbers 1 to 9 on tiles at one side of the open box, they can be flipped up. The only other things supplied are a set of rules on an A5 side of paper (not complex) and a pair of dice.

There are other rules as to the number of turns but any player can win in a single turn and ‘shut the box’ by luck and or skill but probably a good bit of both.

Again stated at ‘7+’. This is a game for two players and again can be become quite technical at the adult level when working out the possible numbers that can be thrown, for instance if you throw 8 and you only have 2, 3 and 4 left to flip that means your turn ends as no combination makes 8.

A simple and well made game, Shut The Box is available from toy shops and online I found it from the link below for £9.56 with free delivery.