Normally to boot a PC you need a DVI or VGA monitor connected. Recently I reviewed a unit that could be a second unit for notebook that had only a USB lead, so this unit was a new thing for me as it has neither DVI nor VGA. 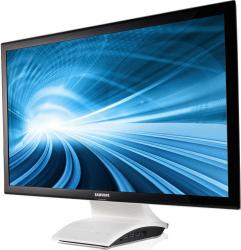 The Samsung C24B750X Smart Station Series 7 monitor has a surround which measures 56x33.5cm and apart from where it joins the stand is only 2cm deep. The screen itself is 53x30cm which gives the notional diagonal imperial measurement of 24inches. The default resolution is 1920x1080. The screen has no side to side or forward movement but can tilt back up to 20degrees.

The stand is quite meaty at 16x23cm and raises the screen around 9cm above your desk. With so many units having far smaller and indeed lighter bases there needs to be a reason and there is as it has a hub and speakers to name but two items built into it. The top of the stand is white as is the arm to the connection to the panel.

Initially you need the provided special DVD to HDMI lead to boot and then you can install the units drivers that should then enable you to boot from HDMI and indeed to boot it using Wireless, you can also display portable devices such as Smartphones with the dock supplied. So this is far from a standard dumb monitor from Samsung.

The rear of the stand has DC in, USB3 in (works with USB2), HDMI in and it even has an Ethernet connector. The left side is clear, the front slopes down to nothing with a touch button, the ubiquitous five position joystick control and another touch button, finally a little lower the touch on/off which lights red when a connection is made and flashes red before it is linked,  but this of course denoting power on to the unit.

Finally the right side which has MHL (mobile device control), two USB3 ports a USB2 port and finally a 3.5mm socket for headphones. One of the USB3 ports (marked 1) is capable of doing fast charging of devices.

When the first connection is made using the DVI to HDMI lead the screen first appears with a border around it which you cannot lose either by changing resolution or by using the units controls on the front edge of the stand and of course at this point there is no sound. So install the drivers and you end up with two icons on your screen ‘Launch Monitor Driver’ and ‘Wireless Connection’. The instructions from here are all well laid out in the manual.

Once you have removed the DVI to HDMI cable and replaced it with HDMI to HDMI cable you then have perfectly filled screen and sound. I found booting after this took a few seconds longer with a message on the screen saying ‘Connecting to PC’. Apart from that I used it for several weeks and it worked fine for all my normal tasks including viewing a few DVDs. I was happy with the sound, the colour and the contrast of the unit.

To connect using Wireless requires the supplied small USB dongle to be inserted and then to run the ‘Wireless Connection’. You are told in the manual that this is not the best connection for those using the panel for gaming. For normal use this works well but of course for showing the screen of say a Smartphone it is great. You can also control the Smartphone using the mouse and keyboard of your PC.

This is called a Smart Station and for designed for notebook users who of course could just plug in an HDMI to HDMI cable while using it as a second screen to save the initial steps that a PC user needs to do with the DVI to HDMI cable. The software – when using a notebook – will install automatically.

This unit was a learning curve the .PDF file on the CD remained in the PC drive during the whole review period as I got to grips with exactly what this monitor could do. Apart from use with a notebook or PC almost any mobile device can be controlled using the Wireless dongle supplied, so when in your office you can work on your mobile device using the PCs keyboard and mouse.

The Samsung SyncMaster C24B750 is very new and currently I cannot find a price.

Hi,
Thank for your article.

I just purchased a Samsung C24B750X but I have a lot of trouble with it. The first problem is that I don't have HMDI on my PC (HP ProDesk)... So I install monitor with USB cable... It was hard but I find it... But now the problem is when I turn on the computer, the monitor still black and don't connect with Pc....

Do you have an idea to help me about that?

Thank you so much !!