With Christmas no longer a distance away, time for serious thought. Here first a game suitable for either two players or solo. Second another of Ravensburgers great jigsaws maybe a gift for someone on their own to enjoy. 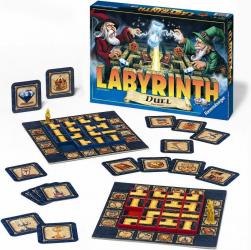 The recessed game boards are 22x22cm with a playing area of 14x14cm that is exactly the same size as 16 labyrinth tiles (four by four) that fit in the space. Although the tile faces are cardboard they fit in red and blue plastic holders so to protect them from wear.

If you add two magicians, sixteen 7x7cm object cards and the book of rules (24 pages in six languages) you have the contents of the box.

It is based on a game by Prof. Dr. Max Kobbert that is now over twenty years old. The new feature is that two people battle it out at the same time. It is suggested that the players should be eight or older.

To get from the first point to the second point the 15 tiles are slid to create a path between the two. Tiles cannot be lifted only slid so the empty space on the four by four grid is vital.

The object of the game is to gain eight cards (each sub game earns the two cards). The single player game can be played against the clock to see what your fastest time is to complete the challenge.

Like most games it sounds simple but a quick eye will determine the way to create the path in the least number of moves.

Doing my Internet searches found Ravensburger Labyrinth The Duel at a best price of £16.99 including free delivery from the first link below. 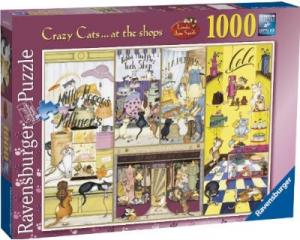 A really delightful puzzle, on the face of it quite easy as although it is a 1000 piece jigsaw it is five different pictures in one scene.

However appearances can be deceptive. It is a landscape puzzle with both the left and right sides being a single portrait image. The central section is formed of three puzzles two smaller portrait ones from the top and a single landscape one running under the latter two portrait offerings.

The subject is of course cats I counted at least forty among the five puzzles but look closely and you may find more.

The puzzle is a work by Linda Jane Smith while I doubt any of the cats featured will look exactly like any real cat the puzzle itself is delightful as are the scenes the cats are set in a range of shops that probably dropped out of existence either side of the second world war. A truly wonderful set of scenes for those of mature years.

Doing my Internet searches found the Ravensburger Cosy Cats…at the shops at a best price of £9.99 including free delivery from the first link below.

I love doing jigsaw puzzles .. for me it's more of an Autumnal and Winter time 'darker nights' activity, because there's nothing nicer than getting the curtains closed on a dark evening, a nice cup of coffee and getting out that first jigsaw of the winter, soon as the clocks changed I was ready to get puzzling and I did my first one last week. So when I saw the review of this Crazy Cats jigsaw I eagerly clicked on the Ravensburger link. Ravensburger do some wonderful adult jigsaws (sighs no, not that kind!), really nice scenes, animals and seascapes, and much, much more .. my latest favourite being the Bombardment of Algiers a massive 9000 challenge .. not forgetting three more in the delightful Crazy Cats range .. Crazy Cats at Home, Crazy Cats Allotment and Crazy Cats in the Garden ..