For a while Nintendo looked like it was going to play underdog to the behemouths of Microsoft with their XBox and Sony with the PlayStation. Many had written of this company as an also run. That was then. Several years on from those predictions and Nintendo is breathing new life into not only itself, but also the games industry as a whole.

Available in
black, white, silver, pink
bundled from £129.99
from Game 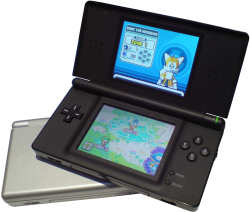 This review takes a look at the latest in the DS line of hand-held game consoles. The Nintendo DS (Dual Screen) arguably saw the turn around in Nintendo's fortunes and a continuation of the strategy that brought the DS to market led directly to the new Wii phenomenon.

Put bluntly - Nintendo had the foresight to put the user, rather than technology, first. So while Sony and other manufacturers have been in an arms race for better graphics along with more raw processing power, requiring every bigger developer budgets and ever long delays, Nintendo quietly got down to innovation. Unable or unwilling to invest the mega development dollars of their rivals they instead used their heads to see what they could do that would interest users. The DS is the result of that strategy.

The DS is a hand-held lightweight clam-shell unit. Open it up and you have two screens arranged one above the other. Both are active LCD screens that show an aspect of the game. The lower of the two screens is touch sensitive and this area is often used to display game controls. By incorporating the touch screen, Nintendo have effectively provided a programmable control area and thus done away with many of the buttons other hand-held devices have but that are only used by a fraction of games.

The touch screen though is more flexible than a row of buttons. One of the early, and most popular games to appear on the DS was 'Nintendogs' - a virtual pet. I have two daughters - the eldest now almost 13, and they are both fans of their virtual pet. The touch screen allows them to walk their dog around a park on a lead (leash), throw sticks and any of a number of other activities.

To supplement the touch screen, the device has a built in microphone - allowing the girls to yell 'sit' at their dog! Educational products have appeared for the DS, such as Brain Training, that have made heavy use of the screen and the microphone to provide rudimentary voice control and recognition.

The sound quality is very good - both from small stereo speakers and (luckily for those nearby) from headphones, which are indispensable for long car journeys, as is the volume control!

Wireless connectivity allows players to gather together with suitable games and play together. Using standard 802.11 (WiFi) technology gaming is perfectly possible between rooms, as my girls have found out - each laying in their own beds in their own rooms when they should be sleeping, but instead playing the same game.

Games come on small cartridges around the size of memory cards from a few years back. I'm not sure of the capacity except to say 'adequate'. There is no memory card slot - the cartridges appear to hold all their non-volatile information with them.

An excellent decision by Nintendo was to include backward compatibility with GameBoy Advance cartridges. In the early days this boosted the available games when the console hit the markets. Now though it also serves as a valuable source of less expensive games that are ideal for younger members of the family. 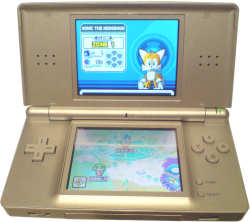 I have to say I was quite concerned with how robust the original version was going to be in the hands of my not particularly careful daughters. I initially bought them screen protectors and cases. The screen protectors didn't last long! The oldest of the two machines must now be around three years old - and despite almost continuous use has lasted remarkably well. It finally died a couple of weeks back several months after a drop from height onto concrete, damaging the hinge irrevocably.

And so now we have the opportunity to check out the DS Lite! The latest member of the family. Remarkably, Nintendo seem to be so happy with the original product that just about all the changes are superficial - there are no functional differences that I can find. The new version is obviously a cost reduction combined with a sleek new design. From the users perspective, the looks are coupled with a significant size and bulk reduction (down from 275g to around 220g). The most significant non-visual improvement is in battery file - up from around 10 hours to 19 on a full charge.

I'm concerned about the longevity of the DS Lite - this revamp feels less robust than the original. I hope that cost reduction hasn't reduced the quality of the design, but then my fears for the original DS were unfounded. The high-gloss finishes of the new versions do look great when clean (read "new"), but show every grubby finger mark and scratch. Taking the pictures on this page took some considerably polishing and these two units have been in use for less than a week! Not that most small owners are going to be concerned about finger marks - just the adults that fork out the money. 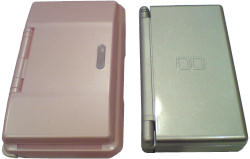 On the plus side the Clam-shell design, despite the potential weakness of the hinge, does provide excellent protection for the screens when the device is thrown to the bottom of a child's bag or is scattered on the back-seat of the car.

The girls are now gleefully 'road testing' the new DS Lites - so I will be reporting back after a few months strenuous use and let you know how they have withstood the test, and just how practical we find the high-gloss finish!

In summary - Nintendo have quite unexpectedly hit a major success story with the DS. The design appeals to girls as much as boys (all our girls friends seem to have them as well) and that appeal has been reflected in the range of games available - blood and gore not featuring particularly highly I'm glad to say!

The DS Lite is also very reasonably priced - probably because of the balance of functionality over technology. Not being at the bleeding edge of technology means less risky design, better time to market, better reliability and ultimately lower cost.

The best prices I've found for the DS are from Game which have DS bundles including various games starting at £129 :

I like to play games in Nintendo. It is very supportive to me. There are many different models in Nintendo consoles.
Rating:

The Nintendo DS is one of the best creations of this company and this article certainly describes what happened when it was released.