This brilliant game is fun for all teens and adults! Once you've played once you'll get addicted! But watch out for the last question, it may get a bit tricky! 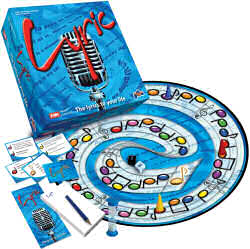 Do you think you are a music trivia champion, or that you know more about lyrics than all your friends? Well here's a fun way to find out! Compete in teams of at least two to commence in a weird and wacky way to become the king of all lyrics!

Lyric is like a Trivial Pursuit game for music lovers!

This board game allows you to explore the world of music with your friends. Lyric contains seven funky types of music questions one of which asks you to completely embarrass yourself doing a silly charade of "Grease is the Word". Others questions include showing of your artistic skills by drawing doodles to describe the chosen song or ask you to name song titles from just a couple of words from the lyrics. There are more challenges including answering from a selection of lyric-based questions, singing lines of various songs and singing songs containing random words in the lyrics!!

The winning team is the first to get to the Golden Note at the end of the game and meet the final challenge : you have to go through a list of six words with your team and sing a song with a lyric containing one of the given words (extremely hard), then onto the next word, and the next, and so on! For those of you that think that's pretty easy (!?!) - you have to do all six songs in 45 seconds. Yikes!

To conquer this game you will have to have the general music knowledge of my Dad... errr no.... only kidding, you have to be a lot smarter than him!! Lyric is mostly suitable for ages 12-112. Any younger and you may find lack of relevant musical knowledge to somewhat restricts the game. The questions cover every period of pop-music with some really old songs that my Dad actually does know, and I haven't a clue, all the way to current hits, so don't let your parents refuse to play because they won't know anything!

I hope you enjoy this game, because I certainly did!

Please note that this game works a lot better in small groups than individual players, it recommended that each team should have at least two players and, unless you want a really easy challenge, there should be more than one team! :-)

The company who made Lyric also made four Deal Or No Deal games, two of which have been reviewed by Paul Smart!

Great for a Christmas prezzie!

Full details from Drumond Park on the following link :