A waterproof camera that can by the aid of GPS tell you where you were when you took the image or movie. I did not get a chance to test if the two features worked together; in fact the only waterproof tests were in my bath. 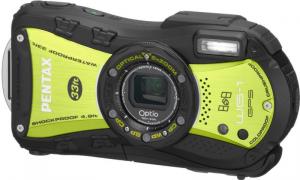 he Pentax WG1-GPS measures 12x6x2cm, these are maximum figures the zoom works on the periscope principle required for a waterproof offering. It is also quite sculptured with either end being 6cm tall but the middle only 5cm, it weights 165grams.

The face has the lens centrally located with the flash above and to the left. My unit was black rubberised with a rather garish lime green strip across it, the latter would be rather useful if you dropped it. Rather unusual features are four LED Macro lights around the edge of the lens surround. The top has just rubberised on/off and shutter release buttons.

This leaves the back which has a 6x3.5cm TFT with the other controls to its right. These are a telephoto/wide angle rocker, image review button, menu button, face diction button, the ubiquitous five position joystick with its top level tasks clearly shown and below this the delete button.

Among the ‘tough’ features of this unit are waterproof to 10metres, shockproof to 1.5metres, crushproof to 100KG and it will withstand -10degrees centigrade. I am afraid I did not test any of these features to destruction.

The Geo-Tagging feature allows you to accurately record where any image was taken and this feature works well.

I found the macro LED lights a little strange but it does allow a digital microscope mode that seems to work as stated.

You can store up to 32 faces in this camera not just humuns as it can also recognise those of animals. The self photo feature uses the blinking lights on the face to tell you if you are centered in the framed image. There are other features not mentioned or tried due to tight time restrictions on the review period see the second link.

The 5x optical zoom with wide angle did allow me to get more into a close framed image than with a lot of other small units.

This is a specialised unit designed for a tough life and also for underwater use; the macro LED lights take getting used to as does shooting very close up. If you need any – or all – of these features you should certainly consider this unit.

Doing my Internet searches found the Pentax WG-1 GPS at a best price of £207.22 including free delivery.