This product almost has the voice recording market to itself, the method buy the opposition, worked a while ago. Dont get me wrong it is a very good package and could well put a lot of typists out of work. It is also happy to work unsocial hours for no pay. 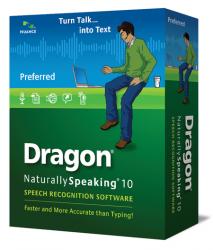 The product comes on a DVD and took around 15 minutes to install on a reasonably fast XP system. Add another 10 minutes for the basic training and microphone testing and you are ready to go. Give it some documents and emails to analyze (this can take a few minutes) and it will already have a good idea of your style, this will help. My initial few test sentences had only one error that to me is near perfection.

There are two versions the Preferred and the Professional. The latter has 20 bullet points of things it does while the Preferred has 13. The seven the Preferred cannot do are ‘formal and edit by voice in Outlook and Office 2007. Voice shortcuts for email and calendar. Comprehensive sorting capabilities. Access your personal speech profile from any PC on the network. Ability to import specific language modules for medical and legal etc. Citrix support. So if you need any of those then you need the Professional version.

The secret of good voice recording is simple, speak normally, do not Darlek speak and certainly do not shout. Put simply speak clearly in a reasonably quiet environment and after a few seconds what you are saying will start to appear in the Dragon bar at the top of the screen, pause only when you would normally do so. It now understands comma and full stop so unlike early versions you do not need to say period. Add in New line, new paragraph and you will be on your way to your first letter.

The microphone included is a normal headset requiring connection via two 3.5mm jack plugs. To my head this was not as comfortable as previous versions and felt tight to me. I have in the past reviewed the wireless version and that was excellent. I have offered in the past to review the version they did using an Olympus voice recorder but for reasons best known to Dragon they rejected this at the time. Certainly the wireless version works fine. I have just been sent the Dragon Mobile 10 review will follow later

There is a small 44 page user guide and this is adequate and contains some illustrations. The tutorials are worth doing as is the time taken for it to analyse your style giving it some documents and emails so it knows how you write.

Most important if it makes mistakes go back and get it to correct them, yes it will initially be quicker to correct them manually but then it will not learn and it will make the same mistakes again. If you have an earlier version of Dragon it will ask if you want your voice files transferred to the new version of it.

Doing my Internet searches found Dragon Naturally Speaking 10 at a best price of £109.97 including shipping from Amazon on the first link below.

Details of the Nuance site :