There are some strange goings-on in Kronville. Can you help? 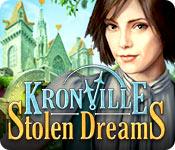 Mixing together elements of a mysterious fire, a missing school bus with its passengers plus ideas gathered from child-centric stories, is a Hidden Object Adventure game entitled Kronville: Stolen Dreams.  In this game, which is available in different formats, including Windows and Mac systems, you are cast in the role of Astrid Missy, a child psychologist charged with the mission to discover the reason for the strange events affecting Kronville as you enter various dreamland environments making up this Hidden Object Adventure.

As already mentioned, Kronville: Stolen Dreams belongs to the Hidden Object Adventure genre.  When setting up this game, individually named profiles can be created to enable different players to tackle the game at their own speed.  These profiles, as well as recording a player's progress, can contain the volume levels for background music and sound effects plus whether the game will be played in full or wide screen mode using a system or custom cursor.  Unlike other games in the same genre, Kronville: Stolen Dreams does not offer the player a choice of different difficulty levels.  You have to accept the default level which many will find to be reasonably easy.

Opening with an animated sequence, the scene is set for the school bus, with its twelve young children passengers and various shadowy figures to make an appearance and then disappear.  You are also introduced to a mysterious house fire.  With this sequence you have the option of making use of a tutorial which concentrates its efforts on explaining the various cursors and the items of screen furniture.  Whether you accept or reject the optional tutorial, a flash-back sequence will retell the story of a young girl's unsuccessful attempt to rescue her family, made up of mother, father plus younger brother, Henry, from the fire.  This is followed by another time-shift as your character is introduced, by the local sheriff, to a misbehaving boy, called Danny, in order to sort out his problems.  One thing you can say about Kronville, it is a complex and challenging place in which to survive.

When viewing the different locations making up this gaming environment, the various scenes will be overlaid, across the bottom of the screen, with the tools that are available to the player.  Taking up a central position is the game's Inventory holding items that have been collected.  The Inventory can be locked so always  visible or allowed to disappear when it is not required.  It can be made to reappear when its area is invaded by the mouse cursor.  By hovering the mouse cursor over the Inventory, a brief description will appear of the selected object.  Positioned to the left of the Inventory is a journal that has sections for automatically recording. progress, goals and a map which displays coloured icons indicating your current position, last destination plus those locations where tasks need to be completed.  The map also has the ability to provide instant transportation between locations.

As mentioned earlier, this game of Kronville: Stolen Dreams make use of a number of child-centric storylines to widen its scope.  This approach allows the game's developers to create a mixture of dreamy unpleasant locations with some having more than a passing resemblance to locations you would have expected to find in the world of Peter Pan or maybe Alice in Wonderland as you move in and out of dreamland states and meet up with various characters.  When meeting characters, conversation can take place, text format only, and your responses to questions can affect the flow of the storyline later in the game.

Rather than restrict the player to a single type of Hidden Object game play, the game's developer have opted to go with different styles of action as you select different or similar objects.  In some cases, you will be asked to find a specified number of objects that conform to a set pattern such as hedgehogs or a child's drawing.  Instead of similar items you could be asked to find a range of items displayed in a text list or presented in silhouette format.  Occasionally the game will use the same cluttered scene but the list of objects will vary.

As you progress through the various locations in this game, you will encounter a number of puzzle style mini games.  These interludes are varied with a  challenging aspect.  Following a short delay a Skip option will become available if a mini game proves too difficult.  There were  a couple of occasions when I was tempted to take this route.

I felt this  game lacked instant appeal although it did grow on me a little.  I also notice that the game benefitted from a price reduction.  Originally it was price at around £7 by Big Fish Games but it is currently priced at £2.99  The game requires a 1.4 GHz processor with 512 MB of RAM running Windows 7 and later.