The first Samsung mobile handset I reviewed was a clamshell unit that could automatically open and close itself at the press of a button. It also came with two battery packs. Neither of these features can be found with this next Samsung handset. 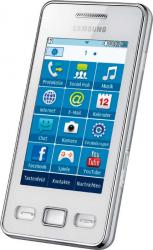 The Samsung GT-S5260 model, otherwise known as the Star II, is a candy-bar style smartphone.  Predominately lacquered black (in the case of the review unit), apart from the combination of matte and reflective silver bands running around the sides, the Star II has dimensions of 107.5 x 54 x 12.4mm (H x W x D) and weighs 94g.  At this weight and size, the handset should fit comfortably in the hand and give easy access to the various controls.

Taking over most of the handset’s front area is the 3-inch WQVGA capacitive touch screen which delivers a resolution of 240 x 400 pixels.  Not unnaturally, the combination of the touch screen and lacquered black bezel and back plate means that finger smears will quickly build up over the surface of this handset.  Opinions seem to be divided over whether finger smears are a put-off or not.  I tend to side with the former view.

Positioned beneath the screen is the main menu key sandwiched between the usual call and end keys.  A volume rocker can be found on the left side of the unit while the other side is home to the power/lock key and a concealed microSD card.  Both the standard microUSB port, for charging and computer connection, and a 3.5jack socket for connecting a headset are located at the top of the device.  A 3.2 megapixel is located on the back of the handset.

When inserting the 3.7V Li-ion battery pack and SIM card, you will need to remove the unit’s back cover.  It does help when carrying out this task if you have finger nails of a reasonable length so that you can run them around the outer edges of the cover so that it can be removed.  While inserting the battery was straightforward, the insertion of the SIM card proved to be a little fiddlier but fortunately this is just a once only task.

I could hardly be described as a fan of touch screens as a means of control.  I much prefer the tactile feel of physical buttons and keys.  However I did find that the Samsung offering was reasonably responsive especially when scrolling between the available three Home screens.  I wish I could say the same for some other aspects of the program.  Using the on-screen keyboard or selecting from various lists produced some unexpected results.  I must concede that some of the blame could be laid on my typing fingers.

A series of dots at the top of the display indicate which screen is currently visible.  You can populate each screen with a different selection of widgets that include those for email sync, Buddies Now, Google, Linkedin and Samsung Apps.  You simply drag the selected widget on to the appropriate screen for it to become active.

As well as the widgets, you have access to 24 different menu items spread over two screens.  Included among these menu items, you will find those for Facebook, Twitter, YouTube and Social Hub which should give you a clear indication that this smartphone is being aimed at those who are regular active participants in the social networking scene.  Other menu items include Internet access, IM (Instant Messaging), music and video players plus the previously mentioned camera facility which can capture still images and video clips.

The Star II supports both Bluetooth and Wi-Fi.  Using the former you can pair with other Bluetooth devices while Wi-Fi enables you to link the smartphone to your home network.  You can also use the microUSB port to connect to a computer.

The usual collection of phone utilities can all be found with this unit.  Included amongst these features are a To-Do list, calculator, calendar, alarm, stop watch, phonebook and FM radio.  Internal memory is set at 30MB.  You can add to this by inserting a microSD card which could give you up to 16GB.

When using a memory card, I found that, even though its presence was acknowledged, the content would only be recognised if the card had been inserted prior to powering the handset on.  A second slightly unusual feature was noted with the auto-rotate feature as the screen switched between portrait and landscape with appropriate applications such as camera, video and music.  The screen would smoothly switch when held in an upright position but would fail to react when the handset was laid flat on a surface.

You should be able to pick up this smartphone for around £80 as a pay as you go device.  It is more suited to the social network brigade but could still appeal to others.