This is MP3/phone as the face when closed has controls designed especially for working with music files. A recent survey said those under the mid twenties never tend to listen to more than thirty seconds of any track; this phone would be idea for them. 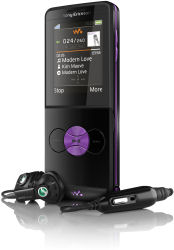 It is 10.5x4x1cm, flip it open and add 4cm to the length, it weights 72grams. It should fit in the palm of all but the smallest hand. The screen is 3x3.8cm, the whole colour scheme is matt black with and orange band, orange W for Walkman at the base and three interlinking circles on the area below the screen with the centre on in orange.

The top of the phone has a hold slider, the left side the Walkman button and the proprietary connector for charging, transfer and earbuds. The right side has the volume up and down buttons. Its rear has external speaker and phone with when the back is removed the battery and Sim card as well as the supplied M2 card are exposed. I found the fitting of the clip on motion of the back a little fiddly.

Flip open the phone to switch on an once you have selected normal or flight mode you can flip it shut and use it as an MP3 player. My phone arrived with getting started guides and user guides in three languages unfortunately none of them were English.

This caused some frustration with transfer of music, I knew it was there but I could not access it. I even did something I detest, forced registration, of one of the pieces of software before I worked out that the files need you work with the 'W' button or the Walkman key and after this I could listen to my choice of music either through the internal speaker or earbuds. For a small speaker the sound is rather good, I am afraid I do not graze tracks but listen from start to finish. I am not keen on the fact that the volume level is reverted to a rather low level each time you shut the phone down (ok maybe I am the only person who ever turns a phone off).

The display in W mode shows signal level, clock and battery state on the top line, in larger characters track number IE 032/057 with a line under this showing the progress through a track. Under this elapsed time and total time of the track with the last three lines being track name, artist and album title.

Open the flip lid and the normal screen display shows the same top line a large W icon in the centre with the time and date below and two soft options Calls and Menu.

The area below the screen has 16 buttons and the ubiquitous five position joystick.

The twelve icons revealed when you press the menu button are Play Now, Internet, Entertainment, Camera, Messaging Walkman, File manager, Contacts, Radio, Calls Organizer and Settings and all the units controls are found somewhere under these. As stated I had no manual and I managed to do everything with a bit of trial and error.

The default screen blank occurs after ten seconds (this can be changed) but unless you make or receive a call there is no need to lose the music.

Looking at the specifications I see the screen is 176x220 pixels but it was always clear and easy to read. While the unit supports podcasts WMA is not. The camera is still images only and 1.3 mega pixel which feels rather underpowered today also there is no flash. There is an ok FM radio but remember the headset is using the proprietary socket so not a standard 3.5mm jack and for those who need Internet it's 2.5G and not 3G.

As always finding prices is difficult I found the first link below on pay as you go for £60 but if you want contract I am sure it will be free.