As one of the main means of communicating with the computer, the keyboard offers manufacturers the opportunity to devise various combinations of features. 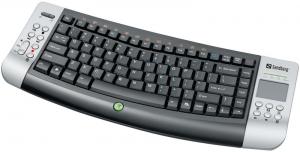 Joining the numerous keyboards that have spent time on my desktop and being unjustly blamed for my poor typing skills is the Wireless Touchpad Keyboard from Sandberg.  This is a USB device that combines standard keyboard facilities with multimedia and application short-cut keys plus the touchpad feature that is standard on notebook / laptop units.  When not in use the USB receiver can be stored away in a recessed slot on the base of the keyboard which is also the location for the battery compartment holding the two AA batteries that power the keyboard.

Decked out predominately in matt and reflective black, the keyboard has a distinct curve to its main body with matt silver style end pieces.  On the right is the touchpad unit with short-cut keys for Internet, email, My Computer, Calculator and backwards/forwards navigation plus LED indicators for Fn, Num, Caps lock and low battery.  The left side features multimedia short-cut keys along with buttons for left/right mouse clicks.

The main keyboard layout has white labels for its keys apart from a blue Num lock and red Fn lock keys.  The secondary tasks of the various function keys, implemented when the Fn lock is on, are also displayed in red with icons.  Due to the additional features at either end of the keyboard, Sandberg has taken the decision not to include a dedicated number pad.  Instead a section of the main keyboard acts in this role when the Num lock key is depressed.  The keys fulfilling this purpose are clearly marked with a blue number on the front face.  Finally a green Windows desktop button is positioned in the centre of the slim, curved wrist-rest.

RTFM (Read The Flipping Manual is the polite version) is advice I should have followed, but neglected to do so, before attempting to use this touchpad keyboard.  The USB receiver had been recognised by Windows and a message announcing the new device was ready for use appeared yet I could get no response from the keyboard or integrated touchpad.  I thought that maybe the batteries were dead or I had been sent a faulty unit.  Neither was true as I discovered when I read the manual.  I had failed to notice a small on/off switch on the base of the keyboard.  Once I had switched the keyboard on I was able to make use of the keyboard.

Having taken the trouble, eventually to RTFM, I knew that certain of the function and multimedia keys were programmed to work only with Media Centre, Windows Aero or Windows Vista Gadgets.  This meant that well over half the function keys were not available on the host Windows XP SP2 system.  There was also no short-cut to open your referred Media Player so that you can take advantage of the multimedia keys.

Switching the keyboard to a Vista system allowed me to check out those function keys dedicated to that operating system.  This enabled me to open the Vista side panel with gadgets and the Aero flip 3D function.  Both worked fine without any problems and gave easy access to their relevant features.  As yet I have been unable to test the Media Centre related keys but do not foresee any problems with this aspect.

Supplied with a multi-language User Guide and batteries, the Sandberg Wireless Touchpad Keyboard is supported by the company’s standard 5-year warranty.  It is best suited for use with either Windows Media Centre or Windows Vista in order to make the best use of this unit’s functionality.  This keyboard has been officially priced at £52.99 and is available for £45.99 including shipping from Amazon on the following link:

I recently came across your blog and have been reading along. I thought I would leave my first comment. I don't know what to say except that I have enjoyed reading. Nice blog. I will keep visiting this blog very often.