It is amazing the difference viewing a video or photo using a decent flat panel makes even if the source is a decent laptop. Most videos today are shot in HD and viewing at less  whatever the size of the panel  is a determent. 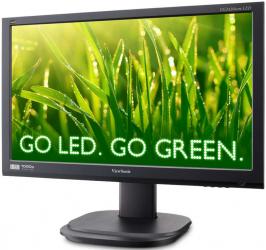 The Viewsonic VG2436wm is not as you may think 24inches however it is close. The overall dimensions are 55x42x18cm, the panel is 55x35cm while the viewable portion of the display is 52x29.5cm which gives the diagonal measurement of 23.5inches. Like all recent panels from around 17inches upwards the maximum resolution is 1920x1080.

Over the last year or so I have tried to review several items from Viewsonic, they have arrived minus bits or just not worked as they should due mainly to the poor checking of items before they were sent out. I have wasted a good deal of time and have been unable to complete several reviews. I was more than sceptical when I was offered this to review but just maybe things have changed, it was a new unit and because of that all the bits were there and while the occasional unit does come DOA (dead on arrival) they are thankfully rare.

So with both VGA and Digital leads as well as both a power adapter and mains lead as well as a 3.5mm to 3.5mm audio lead and a CD-ROM all is as you would buy from a shop which is always the condition I would hope for.

What would have been nice is a DVI to HDMI converter or even better a third connection of HDMI, this would enable direct connection to a DVD/Blu-ray player as well as being able to play content direct from a camcorder or digital camera even a device such as a Veebeam (reviewed 17-1-11) or other such unit with HDMI out.

I happen to have such a device and so I was able to not only test the unit using a PC but also a Blu-ray player and others, I was happy with all and when units did not automatically change to 1920x1080 a message pops up on the screen telling you this is the best resolution and to change to it, most however did adjust to this without request.

Fitting this together is simple as the base fits onto the main arm of the panel by a twist screw that is fixed into the base. The measurements I gave above assume you are using the panel vertical but there is around 15% backward movement and even around 5% forward movement so good for most viewing angles. There is no side to side movement but as the unit is not heavy - 5.4kilos - easy enough to swivel it on its base if this is  required.

On the right side of the bottom are four touch buttons marked 1, 2, down and up as well as the on/off button on the corner of the front right edge. The connectors are under a lip two thirds of the way down the back with VGA and DVI to the left of the stand uplift and audio in and power lead to the right of it.

As stated I not only used this with a PC but also with two notebooks and a Netbook as well as several other  items that require an HDMI connection, I was more than happy with the images and videos shown from all connected devices.

A lot of recent DVD’s often seem dark but here I was happy with the display not only viewed centrally but also off centre meaning that probably five people could all view in a line without anyone being at a disadvantage.

The two 2watt speakers give a good clear sound but as always if watching a DVD and especially a Blu-ray I would suggest separate speakers to get the full impact but for normal work or even for listening to audio they are fine.

The Viewsonic VG2436wm is available from the link below for £200.69 including free delivery.