This is as you might imagine not a whisper quiet unit, however it is powerful in fact dare I say it, it almost has the suction power of a D*s*n and that was the only cleaner to actually lift a section of a fitted carpet from the floor. 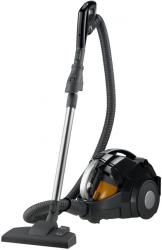 It is also not that light for a pull along unit however many of the minus points normally associated with pull along units do not apply here. It is 44x23x31cm and weights around 7kilos.

Unlike some other units that require a lot of assembly the main body is one and the arm is only two more and simple clicks put it together. It has a good length of electric cable at 8 metres that pulls out from the body and only a couple of taps on the rewind button gets it all safely gathered in providing it is allowed to flow freely. The flexible tube is 1.65metres unstretched and the solid handle expands from 60cm to a metre thus enabling you to reach things like curtains and those hard to get cobwebs as this is a unit not just for carpets and floors. The actual cleaning foot 28x14x5cm and has an easy flip control to go from thick rugs to no pile carpets.

At the top of the arm is a slide control from off to curtains to sofa to carpet to floor with the ‘jet engine’ type roar increasing as you go down the settings. Interestingly the noise comes not only from the main body of the cleaner but also from the foot.

Like some other cleaners today it has no bag but when you empty the container very little dust escapes as the action collects it all into a solid mass in fact it can almost stand up when emptied. The action that compacts the dust also has another plus in that it needs to be emptied less frequently. It also has a HEPA H13 carbon filter to allow less dust back into the room and ten layers of filtration helping those with a number of allergies.

The maximum power is stated at 2000watts while the suction is stated to be 360watts. The capacity of the dust holder is 2.2litres but this is a lot of compacted dust and unlike a lot of other cleaners being near to full does not seem to diminish the suction power.

In use providing you always keep to fairly straight paths the main body will keep up to tight a turn and of course it gets caught on the corner of the sofa etc. It cleans well and once you get used to just adjusting the slider on the top of the arm as you go from one type of carpet to another. I admit to having had a couple of hard to reach cobwebs, just move the slider as you move from floor extend the aluminium handle and they are no more – no sliders were harmed as they have long ago left – the top of the wall is now as clean as the rest.

For those occasions when the foot is too large to get into those crevices you can easily just use the nozzle there are a few other items like a crevice tool and a mini turbine nozzle but I suspect they will remain the box and most people will just use the bare nozzle. A close look at the body of the cleaner shows a storage place for the crevice tool so that should always be with you.

The unit is pulled with two large wheels at the back and a single small wheel at the front. It appears to only come in red.

There are some nice images of how the dust comes out when the cleaner is emptied on the LGE link at the end.

Doing my Internet searches I could not currently find the LG Compressor Plus VK9820UHR as it is very new, however it is shown on the LGE site below.

the photo thanks
Rating: