The Sisterhood of Red Riding Hood.

And you thought the Red Riding Hood story ended with the death of the wolf at the hands of the woodman but that was only the start. 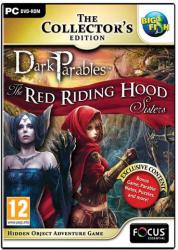 As part of the Dark Parables series, The Red Riding Hood Sisters game is now available in Collector’s Edition format from Focus Multimedia.  Along with the main Hidden Object Adventure game, this Collector’s Edition offering comes with various bonus items including the bonus game of The Boy who cried Wolf.

In order to play the bonus game, you will need to complete the main game first.  The other bonus items are made up of puzzles, wallpaper, movie gallery, music, concept art and Parable notes for fleshing out the storyline can be accessed at any time from the main title screen.  There is also an integrated Strategy Guide which can be access from within the game to provide step-by-step instructions in case you get stuck.

The main game, as its title might imply, is based on the Red Riding Hood Sisters.  This previously unheard of organisation was set up by Isabella, the original Red Riding Hood, to protect the local community from wolves controlled by the mysterious Wolf Queen from her Mist Kingdom.  You, in your role of a detective, have been sent to help the sisterhood following an increase in wolf activity.

Prior to starting the game you can set up your profile as you adjust the volume levels for music, ambiance and sound effects.  Options are available to play the game in full and wide screen modes with a system cursor along with a choice of difficulty levels as you select from Casual, Normal or Hard.  With Casual mode you get puzzles that can be skipped, sparkles to identify interactive areas and a faster Hint recharge.  There are fewer sparkles and a slower recharge in Normal mode plus the opportunity to skip a puzzle or two.  Hard mode insists on puzzles being completed and does not offer any sparkles or hints.

All the scenes in the game are well-drawn with built-in animations to add extra visual appeal.  Running across the bottom of the various scenes is an area containing the tools available to you.  Taking up a central position is your inventory with chevrons at each end enabling you to cycle through excessive items that can not fit in a single screen.

On the left of the inventory are the Hint feature and a link to a storybook containing the Parables on which the game is based.  In order to view these Parables during the game you will need to collect the individual elements making up each one.  Next to the Hint feature is yet another link but this time giving details of your current task.

On the right of the inventory is a chart-style map showing the current game environment.  This map shows a series of boxes representing the different locations.  The boxes are linked together showing the route you need to take to move between locations to reach your next destination.  Alongside the map is the Strategy Guide covering the game’s ten chapters, bonus puzzles, the bonus games and cursed morphing objects.  This latter item relates to twenty special objects which have the ability to change shape.  By collecting these items you can speed up the Hint recharging process.

When exploring the various locations, the mouse cursor will change shape to indicate when certain actions are possible.  Arrows appear to show directions in which you can move.  When a conversation is possible a speech bubble will appear while a magnifying glass is used for interactive areas and a pointing figure for collecting items.

Hidden Object sessions, identified by an outbreak of sparkles, appear frequently throughout the game.  Rather than ask you to find items listed in text format, the game presents you with various segments which you need to find.  These segments are divided into three groups.  When all the segments in a group have been located then they join together to form a larger item which then merge together to create an object which will be will be added to the inventory.  This object will be required to complete a task later in the game.

The game makes use of two types of puzzles.  The more general type of puzzle generally involves repeating a sequence, matching pairs of items or removing objects from a game board.  There are also custom puzzles that are made up of interactive elements with which you need to interact in the current order in order to complete a task.

Appropriate sound effects are used with throughout the game with voice actors supplying the dialogue.  At times I felt the story line was slightly confusing but it did not spoil the overall enjoyment of the game.  The bonus game of The Boy who cried Wolf follows the same basic format of the main game but has less content.

Priced at £10.20, the Red Riding Hood Sisters requires a 1.00GHz processor with 512MB of RAM and 1085MB of hard disk space running Windows XP and later.