It is time to join up with a band of pirates. I am, of course, referring to the type of pirates who sailed the seven seas in the vicinity of the Caribbean in years gone by as they preyed on merchant vessels and, according to Jack Sparrow, lived by the Pirate Code. This particular band of pirates, led by their charismatic leader, Captain Salty, inhabits the TAG Publishing title of Caribbean Jewel available from GSP. 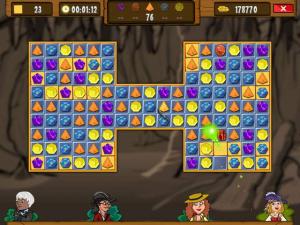 Available as a download rather than a boxed product, Caribbean Jewel gives you a comic book style of storyline with well drawn scenes and printed text.  Returning from his latest round of plundering and pillaging, all carried out in the background so as not to offend the less bloodthirsty game players, Captain Salty discovers that his wife, Pepper is missing and there is no supper waiting for him.

The situation deteriorates even further when Salty realises that his map revealing the location of the infamous John Pick’s treasure is also missing.  Never the one to jump to conclusions and trusting his wife, Salty thinks the matter through and decides that both Pepper and the map have been taken by his deadly enemy, Long Joe Silver.  Gathering his band of pirates together, Salty sets out to track down Long Joe Silver in order to rescue his wife and regain possession of his precious map plus maybe he would then get his supper.

Thus begins a series of Match 3 challenges that always begin in exactly the same fashion.  You are shown an illustrated map of a Caribbean island.  While the island has a number of different locations, including a fort, cave, and village, you have no choice in the order in which you can visit one.  You just have to follow the set path and complete each Match 3 level as it is presented to you.

Match 3 game play follows the standard pattern of displaying layouts made up of tiles holding coloured jewels.  You need to creating groups of 3 or more jewels of the same colour by switching adjacent tiles either vertically or horizontally.  The group then disappears and is replaced by tiles falling downwards.

From time to time obstructions will be positioned as part of the layout.  These obstructions will need to be removed so they are not blocking jewels from falling downwards.  In order to remove them you need to create a group of 3 or more jewels of the same colour.  The group can be arranged along any side of the obstruction to ensure its removal.  Press-button tiles appear in various random positions and these will explore if clicked on or moved thus destroying tiles and obstructions in the immediate vicinity.

You will be rewarded with money in the form of points for each level completed.  The amount will depend upon the time taken to complete a layout plus the number of tiles that were smashed.  By building up a healthy balance you can then pay for the help of special members of your pirate force.  Headshots of the specialists appear at the bottom of the screen and once they have received the appropriate fee they will be able to use their skill to remove groups of tiles and the jewels they hold.

An occasional cut scene will appear to help move the story along as you complete all the levels for a particular location.  As with the opening scene, these latter offerings will be in comic book format with printed text.

This is the type of game that will only really appeal to fans of Match 3 game play.  Apart from the different challenges for each level, there is no variety in the game and it can become boring.  The game is priced at £10.20 and requires a system with a 1 GHz processor with 520MB of RAM and 52MB of hard disk space running Windows 95 and later.