As the Shaman of the tribe, it is your duty to protect it from the evil forces that are threatening to destroy the village in a couple of titles from the Mystery Age series. 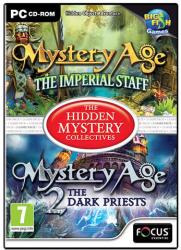 As part of its Hidden Mystery Collections, Focus Multimedia has brought together a couple of titles from the Mystery Age series.  These two titles are The Imperial Staff and The Dark Priests.  Both offerings fall into the Hidden Object Adventure genre and were originally released by Big Fish Games.  Each title needs to be installed separately and it will place an appropriate icon on your desktop for easy access.

The Imperial Staff casts you in the role of Eva who, along with her husband Samuel, shares the duty of the tribe’s Shaman.  The game starts as Eva takes her daughter Amber on a trip to gather herbs.  This trip is used to help introduce you to the main aspects of this Hidden Object Adventure game.  Rather than search for complete objects that are displayed across the bottom of the screen, you will need to locate the pieces that come together to create the various items.

Alongside each of the various items will be a number that indicates how many pieces are required to make the complete item.  As each piece is located so a section of the item is blacked out and the number required will be reduced.  Once an item has been completed it will be added to an inventory which runs down the right side of the screen.  While all the items in the inventory will need to be used at some stage, there will be occasions when you will need to use them immediately in the current scene in order to reveal other pieces that you will need.

There is a Hint feature that can be used to identify the general area in which a yet-to-be-located piece can be found.  The Hint feature is of the rechargeable type and is not the quickest when it comes to performing this task.  Fortunately each scene contains a number of eye icons which, when clicked on, help speed up the recharge process.  Generally you will need two eye icons for a complete instant recharge.  As the number of these eye icons is limited, it is best not to waste them by accidentally clicking on one when the Hint feature is fully charged.

From time to time you will be faced with a mini-game which takes the form of a puzzle that need to be solved.  These puzzles involve such tasks as rearranging items in a certain order, aligning colours correctly and making matches in a speed test.  A Skip option does become available after a period of time just in case a puzzle proves too difficult.

As mentioned earlier, you are cast in the role of Eva.  When she returns to the village with her daughter Amber, she discovers that a powerful storm was threatening the village with black rain.  Samuel, her husband, had set out to find what was causing the storm.  Eva decides to follow Samuel and help him in his task.  Rather surprisingly she opt to take her daughter with her on this journey of adventure which does involve a certain amount of back-tracking as some locations need to be visited more than once.

Joining together the various sections of the story are cut scenes.  These consist of animated characters conversing in print rather than spoken dialogue before Eva and Ember move on to the next location.  You do have an options to skip any of these cut scenes if you are in a hurry to get back to the more interesting parts of this game.

Starting around 30 years after the first title, The Dark Priests takes up the story of Amber who is now a young woman and acts as the tribe’s Shaman as her mother and father are now dead.  With the aid of the Imperial Staff, Amber has to face and defeat the Dark Priests of the Chaos God who were threatening her village.

Again a mixture of hidden object game play and puzzle solving is used but this time there is a difference.  Depending upon the game mode you will either have a full inventory running across the bottom of the screen in Adventure mode or a bar showing the items you need to locate.  Hidden object scenes are indicated by an electrical discharge.

Rather than searching for the pieces that make up the required items, this time you are shown the individual components that make up the tools you need to complete different tasks.  For example you might need to find the components of a canon, sections of a map or the various items that make up a saddle.  When you have found all the components of a particular tool it will be automatically transferred to a spare compartment in the bar where it can be used in the current scene to reveal an item you require.  At the conclusion of each hidden object scene you will be rewarded with an object that will be added to your main inventory for use when you need in later in the game.

Overall I found the Dark Priests had more of an adventure feel to it then The Imperial Staff.  The story line tended to flow better in and was a more enjoyable playing experience.  Bundled together the two games are priced at £10.20.  Game specifications calls for a 1.0GHz processor, 512MB of RAM, 384MB of hard disk space running Windows XP and later.