The normal phrase is Lights, Camera, Action! but, as fans of Nancy Drew will appreciate, when a certain young lady detective is involved then matters are rarely considered normal. So in this event it is more a case of Light, Camera, Curses! as Nancy tackles a HeR Interactive game that is available from Focus Multimedia. 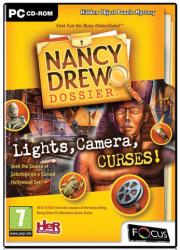 Although described as a “Hidden Object Puzzle Mystery”, Light, Camera, Curses! does not follow the usual trend of presenting the player with numerous lists of objects which need to be located in various scenes.  Instead this game is more inclined towards the concept of finding objects and then pairing them together in order to carry out specific tasks.  For example pairing a battery with a torch or some tape with a broken connection will allow you to make progress in this game.

The game starts as Nancy receives a letter from Molly McKenna inviting her to Hollywood.  Molly is producing a remake of Pharaoh. This rather mediocre film gained extra publicity when one of the characters was bitten by a venomous snake in the final scene (shades of Cleopatra).  This unscripted incident made the unlucky recipient into a Hollywood legend.   The new version of the film is being filmed in a modern theme park.

On arrival, Nancy’s first few tasks take the form of a tutorial as you are introduced to the game’s interface and mode of game play.  Positioned in a central position at the bottom of the screen is the Action Bar.  This Bar contains tools, such as an eye, hand or torch to illuminate dark areas, which allow you to interactive with various objects within a scene.  To the right of this Bar is the Goal Box which displays the current task along with the number of discoverable items in the scene.  Moving over to the left side of the screen you will find your journal containing information you have discovered plus your on-going score.

By moving the mouse cursor around the screen you will find areas that sparkle to show they contain an object which will prove useful at some stage.  Items can be examined or used as required.  When not needed immediately, objects will be encircled by a bulb so that you know where they are.  At some point you will need to match each item with another so that it can be used in some way.

Points are awarded for each successful match.  You can gain bonuses for making a sequence of matches.  As your points’ total increases, so does your Detective Ranking.  A special ending to the game is awarded for achieving the highest rank thus encouraging you to replay the game in order to improve your score.

From time to time you will meet and need to question various characters.  Any conversations involve the actual voices along with printed text.  A talking head represents the other party with some lip movement evident during the initial exchanges.  A list of questions or topics will be displayed from which you can make your selection to guide the conversation.  As with making matches, points are given for asking the right questions.

The game is divided into chapters with a report being displayed regarding your current progress.  Still pictures are used to link together various sections of the story or to display action sequences.  When Nancy moves between various buildings and locations you are shown her footprints appearing on a map.  At the end of some chapters you can access a bonus round to help build up your points’ total. There is a series of mini games that need to be completed.  Once successfully played in the main game these mini games become available from the main menu by selecting an Arcade option.

“Lights, Camera, Curses!” is certainly challenging with numerous tasks that need to be completed to make progress in the game.  The make-up of the game is more adventure-style orientated and will appeal to fans of that genre but could disappoint anybody thinking that this was the usual type of hidden object game play.

Priced at £9.99, this game requires a Pentium 1GHz processor with 512MB RAM and 300MB of hard disk space.  You need to be running Windows XP and later.