Joining the ever-expanding range of iPod add-on devices is Kensingtons latest FM device for working with your car radio. 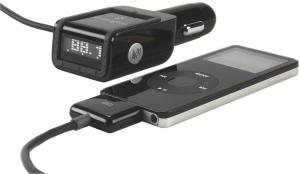 Kensington has consistently supported the iPod platform with many of its products.  In the past the company has developed external speaker units; and adapter to enable the iPod Shuffle to be connected with standard iPod peripherals; rechargeable battery packs; and various solutions for in-car use.  Recently added to the latter group is Kensington’s Liquid brand featuring both LiquidAux and LiquidFM products for connecting an iPod to a car radio.  Whereas the LiquidAux products require a physical connection to the car radio’s auxiliary port (not all radios have such a feature), LiquidFM uses FM transmitter technology to deliver the content.  Having already reviewed a Kensington LiquidAux product, it is now the turn of the company’s LiquidFM Deluxe device.

The cigarette lighter socket plug features a small LCD display for showing the selected FM station.  Situated on top of the plug is an on/off switch which is so small and inconspicuous that you could easily miss it.  I know I did.  More prominently, a button on the right side of the plug can be used to activate the QuickSeek tuning facility built into this product.  The QuickSeek feature finds free frequencies and you can assign three of them to the available pre-slot slots that are available from the front of the cigarette lighter socket plug. As well as transmitting a signal from the iPod to the radio, the LiquidFM device will simultaneously charge the iPod.

You then need to tune the car radio to whichever frequency you have decided to use.  Volume adjustment can be made either from the iPod (Kensington recommend around the 75% level) or car radio while other settings can be made via the car radio.  The LiquidFM device makes use of ClearFM™ technology, licensed from Aerielle Inc., to deliver a crisp signal to the car radio.  For those whose car radio supports RDS (Radio Data System) then the current track and artist details can be displayed on the radio’s display.  Presumably this feature will be of more relevant to any passengers as the driver’s eyes should be on the road.

Setting up the LiquidFM connection is relatively straightforward although I found that I struggled a little when inserting the cigarette lighter plug into the socket.  The length of the supplied lead should be ample to ensure there will be no difficulty in positioning the iPod where it will not prove to be a hindrance.  Signal strength was good with no discernable interference.  Supplied with Kensington’s two-year warranty, the LiquidFM Deluxe for the iPod product has been priced at £69.99.  This might sound a little pricey but the performance warrants it.  Currently this is the device I use when undertaking long car journeys.