Polaroid Camera and Printer All In One

Unless you are quite young you (or your parents) will remember the Polaroid camera. Take an image and it was printed on rather yucky paper and the image that soon faded if left in sunlight. This is something rather different. 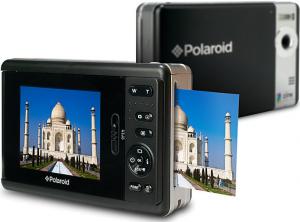 It is 12x7.5x3.5cm and weights 315grams. It is predominately matt black with the tops and side silver grey.

It is a conventional digital camera with the Polaroid Zinc printer built in. However unlike the earlier offerings you do not have to print everything. In fact should you wish take ten or twenty images and then only print what you want as it has a TFT screen where you can review everything you take.

The charm (if that’s the word) of the original Polaroid was the instant memory of the immediate image and that can be produced here. Unlike the earlier product you can also save the image on SD card and then print it out at home later on a conventional printer and the 5MP image size should easily support a full A4 image.

The camera itself works slightly differently to a conventional current digital camera in that there is no halfway down with the shutter. Point the camera and give it a second to focus then press the shutter and the image is captured.

The base has a tripod screw; the left side has A/C power input, micro USB and a wide angle/macro slider switch. The right side has the exit point for any printed photos and the top has on/off button and the shutter release. This leave the front with the lens and a small flash mounted 1cm above the lens.

The printer is identical to the stand alone unit I reviewed around a year ago (17-11-08) here it is implemented into the camera. It uses ‘zero ink’ so the technology is unchanged the images although small and quite clear and of course instantly dry.

The unit comes with a fabric case and this has a belt loop on the back to allow you near instant access to the unit.

The heavier weight is unavoidable as this is a camera and a printer in the one unit. You do need the special paper (packs on ten) and this cost will need to be considered if however you are trying to take an instant image to give to someone then it works well. Today of course most will use a mobile phone to do the same thing.

The original Polaroid Zinc printer is sold by Firebox at £49.95 and while the camera can do certain things like adding borders etc before you print you are in fact paying £180 more for the camera. I am sure the majority of digital cameras can be purchased for less than that figure. So in fact you are paying for convenience.

I am not sure how well this will go down at the price of £229.95, while it is adequate digital camera, the flash is nothing too special and it only has digital zoom. It is only the immediacy that is has in its favour and at the price it is not that much. My original thoughts for the printer of being able to produce immediate security photos is a selling point for say someone visiting a building for a day might give it some sales but am I clutching at a straw? Another thought maybe for a fan at an event getting a photo of their idol and then getting him/her to sign the photo. From pressing print to a dry image being produced is only forty seconds of time.

The Polaroid PoGo Instant Digital Camera a winner
in a specialized niche. This Camera is everything
it claims to be. Going to the pet store? with your
Grand Parents or kids? You can win instant
Celebrity status taking the Polaroid PoGo with
you. Most people however are going to use their
phones to do same thing, but those of us who were
once kids know how important it is to have your
cake and eat it too. The Polaroid PoGo yet being
basic in its functions will break the ice with any
kid and amaze the older generation who remembers
the old Polaroid Classic Camera. Technology is
Great!
http:\\www.digitalcameraprinter.org