Time to splice the main brace, raise the Jolly Roger and live the life of a pirate if you dare.

£4.99 from Amazon
including shipping 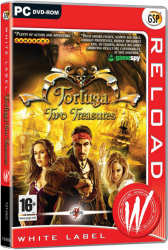 As part of the Reload White Label, : Two Treasures is available at the bargain basement price of £4.99 from Avanquest (plus £2.99 shipping) Software Publishing Ltd.  As the title suggests this Ascaron developed game involves pirates and all the different types of activity normally associated with this seafaring, criminal element.

The game, which requires both ActiveX 9.0C and AGEIA PhysX System (they are supplied as part of the standard package), gives you the choice of starting your career as a pirate at the Ship Boy, Ordinary Seaman, Seaman (default), Captain, Admiral level of experience.  Your role in the game is that of Thomas "Hawk" Blythe.  It has to be said that your on-screen character does bear a somewhat striking resemblance to a certain Captain Jack Sparrow.

Without any preamble you are quickly thrust into action with a mission to destroy another vessel.  Controlling your vessel requires a combination of keyboard and mouse controls.  You can raise and lower sails to improve speed and navigation issues plus turn left or right (maybe that should be port and starboard).  The mouse can be used to change the zoom level, viewing perspective and firing your cannons.  The sea battle action is handled fairly reasonably with appropriate sound effects, both from the weapons and crew noises, while damage appears on either ship.

There is one limitation with regards to sea battles that does spoil the overall effect somewhat.  You are restricted to firing your cannons broadside (many ships of the period have cannon mounted at the prow and stern of the ship).  You do, however, have an inexhaustible supply of cannonballs with which to attack your opponent.  Other types of weapons will need to be replaced by purchasing them using gold looted from your conquests.

Following ship-to-ship combat, you will generally need to board the other vessel in order to finish off the crew and claim any prizes that might be available.  This brings the action down to a personal level as you guide your character, in third-person mode, around the deck attacking any enemy crew members you find.  Sword play is fairly elementary to start with as you are limited to just an offensive and defensive move.  Later, as you gain experience, more fighting skills will become available but I generally stuck to all-out attack without worrying about any finesse.  At times you are hampered by some of the camera angles that are not all that brilliant.  You can loose sight of your opponent as scenery can tend to block your view.

Cut-scenes are used to link together the various adventures that face your character as he sets out on a mission that will include romance, treasure and truth.  Some of the dialogue used is rather basic and is delivered in a manner that makes you want to cut short these animated interludes and get back to the "real" action.  At the conclusion of the various cut-scenes you will be shown a status report as to any rewards gained and an option to trade with your ill-gotten goods.  You will also have the opportunity to pick up supplies in the form of power-ups that can be found floating around just waiting to be picked up.

Not all the action takes place at sea.  There is plenty of land-based elements to be faced and overcome.  Towns and villages can be visited as you meet and question other characters, maybe killing several if the mood takes you, to gain information.  You might even come across a treasure chest or some useful power-ups that will help you on your quest.

: Two Treasures, one or two inconsistencies apart (some large fish seem to be swimming about the waves), is visually impressive.  Game play is reasonable without offering too much that is out of the ordinary.  You are hardly likely to find yourself playing the game for an all-night session but it is the type of action you can indulge in without a steep learning curve.  While at £4.99 it is not going to break the bank.  Recommended system requirements are a 2.6GHz processor with 1024MB RAM, 256MB graphics card and 4GB of hard disk space running Windows 2000/XP (SP2).